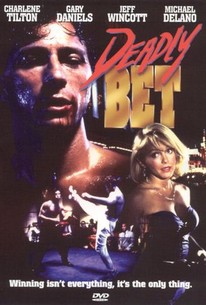 A luckless kickboxing alcoholic gambler's obsession causes him to use his girl friend as a stake in his latest bet--that he can beat a kickboxing mobster, famous for fixing Vegas matches. He loses, but lacks the nerve to tell her about it and instead continues to make plans to move to Colorado with her. Unfortunately, she finds out and, to get even, moves in with the crook who won her. Meanwhile, the boxer makes another bad bet and ends up working for a vicious loan shark to pay off his resulting debt. He also begins drinking so heavily that he cannot function. He hits bottom soon enough, but then decides to turn his life around and enter a kickboxing tourney with a half-million-dollar prize. The film went straight to video after it was made and features violence and sexual situations.

Ron Hall
as Fighter
View All

There are no critic reviews yet for Deadly Bet. Keep checking Rotten Tomatoes for updates!

Jeff Wincott makes a cool performance as a complusive gambler almost loses everything, including his girlfriend, to a ruthless kickboxer. but he must prove his worthiness, quit gambling and beat his enemy in the ring to get his girl back. Hokey setup, granted, but a decent movie with lots of good in-the-ring fighting and local Vegas colour.