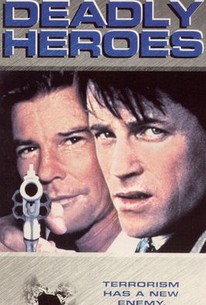 In this action-thriller, Brad Cartowski (Michael Pare) is a Navy SEAL whose wife, Marcy (Claudette Mink), has been kidnapped by a band of Libyan terrorists. The terrorists have also hijacked an airliner filled with passengers, and in exchange for the return of both Marcy, the jet, and its passengers, they're demanding the release of Carlos (Billy Drago), the leader of their organization who has been captured by American operatives. The United States warily agrees to the deal, but after Carlos is set free in Athens, he and his men decide to keep the plane -- and Marcy. An outraged Brad discovers the U.S. military is hesitant to step in and save Marcy, so he teams up with fellow SEAL Cody (Jan-Michael Vincent) to stage a rescue mission on their own.

Joseph Goldman
as Fisherman
View All

There are no critic reviews yet for Deadly Heroes. Keep checking Rotten Tomatoes for updates!

There are no featured reviews for Deadly Heroes at this time.