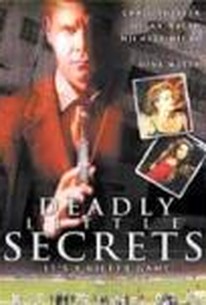 Fiona MacKenzie's revenge thriller Deadly Little Secrets begins with the death by steroid overdose of a famous sports star. The athlete's brother, Cole Chamberlain, begins his own investigation and discovers Gordon Childs (Craig Sheffer), a doctor who has been performing lethal experiments with performance-enhancing drugs. As a pair of beautiful sisters brings him closer to the truth, Cole must decide how far he wants to take his revenge. ~ Perry Seibert, Rovi

It starts out with a chance to be interesting, but opts for the road less traveled (which unfortunately, leads straight to video).

I could be totally harsh on a film like this and pick it apart from script to directing to cast to production values, but really that's shooting fish in a thimble. Deadly Little Secrets isn't intended for Oscars.

Deadly Dull and more than a little dumb ... Dialogue is stilted, characters are walking clichés, and the plot makes bugger-all sense ... on the bright side, it's got Dina Meyer

There are no featured audience reviews yet. Click the link below to see what others say about Deadly Little Secrets!