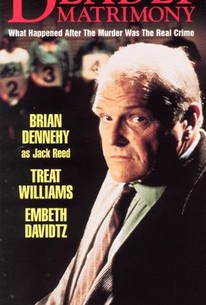 Brian Dennehy makes one of his many TV-movie appearances as Chicago homicide cop John Reed in the two-part Deadly Matrimony. Reed's quarry this time is mob lawyer Treat Williams, who murders his wife and then effectively covers his tracks. The closer Reed comes to the truth, the more he's in jeopardy of losing his job (and possibly his life) thanks to Williams' friends in high places. Based on a true story, part one of Deadly Matrimony was first telecast on November 22, 1992. In part two, which debuted November 23, Reed is victimized by the crooked cops under Williams' thumb, but refuses to knuckle under to mob pressure.

Janet Bailey
as Reporter No. 7

Desmond Campbell
as Cop at Canal

Michelyn Emelle
as Associate No. 3

Brenda Kamino
as Reporter No. 5

Michael Ricupero
as Cop No. 1

Robbie Rox
as Bodyguard
View All

There are no critic reviews yet for Deadly Matrimony. Keep checking Rotten Tomatoes for updates!

There are no featured reviews for Deadly Matrimony at this time.