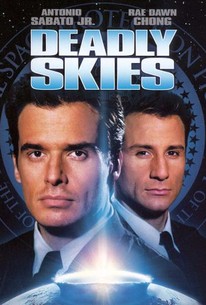 When a keen-eyed scientist discovers that a large asteroid is currently on a deadly collision course with the planet Earth, she must seek the help of a military outcast to jump into action and save humanity from annihilation in a tense, end-of-the-world thriller starring Rae Dawn Chong, Antonio Sabato, Jr., and Michael Moriarty. Dr. Madison Kelsey (Chong) has made a terrifying discovery, but time isn't on her side and in order to prevent the largest disaster ever known to man she is going to have to act fast. Though ex-military scientist Richard Donovan (Sabato, Jr) may be able to help, he is still reeling after being ejected from the armed forces due to his homosexuality. There's little time for old grudges in these final days, however, and when Dr. Kelsey and Donovan agree to work together for the good of mankind, the rest of the world waits with baited breath to receive word of their ultimate fate.

There are no critic reviews yet for Deadly Skies. Keep checking Rotten Tomatoes for updates!

Most of the acting is atrocious and the special effects are bargain basement but if you enjoy either disaster flicks or thrillers it's okay.