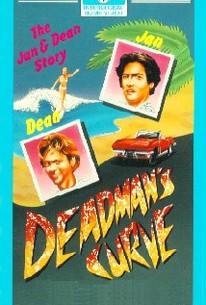 Deadman's Curve is a made-for-TV biography concerning "California sound" rock-n-rollers Jan and Dean. Richard Hatch plays Jan Berry, while Bruce Davison is seen as Dean Torrence. The meat of the story is Jan's grueling efforts to fully recover from a disastrous 1966 auto accident. The film's most powerful scene occurs when the still-shaky Jan attempts a concert comeback, only to be booed offstage when the audience realizes that he's lip-synching. First telecast February 3, 1978, Deadman's Curve is seasoned with cameo appearances by Dick Clark, Wolfman Jack, and Beach Boys Mike Love and Bruce Johnson.

Dick Clark
as Himself

Mike Love
as Himself

Bruce Johnston
as Himself

Art Koulias
as Freddie
View All

There are no critic reviews yet for Deadman's Curve. Keep checking Rotten Tomatoes for updates!

There are no featured reviews for Deadman's Curve at this time.