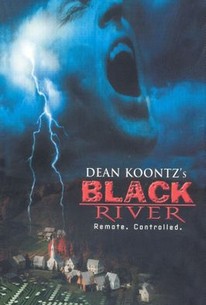 Sci-fi novelist Bo Aikens (Jay Mohr) is fed up with life in Los Angeles. He heads out of the hustle and bustle of the big city to the small, idyllic town of Black River, where everyone is happy, contented and welcoming of strangers -- except for a burly redneck, but he'll be put straight soon enough. Not by Bo, but by an invisible force that rules the town. Troubled by various, peculiar Twilight Zone-ish twists of fate, Bo tries to leave Black River but finds he cannot -- at first because his car has been smashed into a cube, and later by deadly beams that rain from the sky. What's the sinister secret of Black River? Why is Bo being kept prisoner? And why is everyone so dang happy?

There are no critic reviews yet for Dean Koontz's 'Black River'. Keep checking Rotten Tomatoes for updates!

There are no featured audience reviews yet. Click the link below to see what others say about Dean Koontz's 'Black River'!