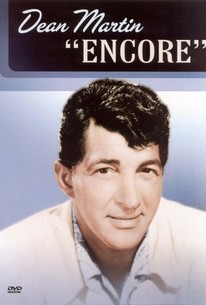 This program provides the viewer with a repertoire of some of the greatest hits of one of the most popular entertainers of all time. Dean Martin led a charmed life in the entertainment business. The singer found fame as the handsome straight man for comedian Jerry Lewis. Following their long run, Martin became a member of Hollywood's famous Rat Pack, which included his singing cronies, Sammy Davis Jr. and Frank Sinatra. Dean Martin is shown here at his musical best, performing some of his standards. These include "Everybody Loves Somebody," "Pennies From Heaven," "Memories Are Made of This," "C'est Ci Bon," and "That's Amore."

There are no critic reviews yet for Dean Martin: That's Amore!. Keep checking Rotten Tomatoes for updates!

There are no featured reviews for Dean Martin: That's Amore! at this time.