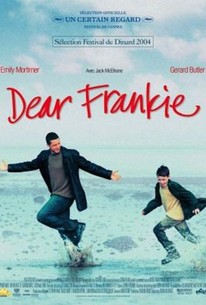 Directed by Shona Auerbach, Dear Frankie revolves around nine-year-old Frankie (Jack McElhone) and his mother, Lizzie (Emily Mortimer). The mother and son duo have been on the run for as long as Frankie, who has been deaf for years, can remember. In an effort to protect Frankie from the truth -- that a psychotic father, whose physical abuse caused his hearing loss, is at the root of their constant need to move from one home to the next -- Lizzie pens a series of letters from Frankie's "father" in hopes of assuaging his curiosity. However, when Frankie becomes convinced that his father is taking a break from his exotic adventures and making his way back home, Lizzie must make a tough decision: find another way to pacify Frankie's desire to meet his father or tell him the awful truth. ~ Tracie Cooper, Rovi

Gerard Butler
as The Stranger

Andrea Gibb
as Waitress
View All

Mortimer, McElhone, and Butler each bring sensitivity and likability to their roles, but they've an uphill battle personifying characters who are, respectively, a clairvoyant, a fantasist, and a fantasy.

A bittersweet bonbon of a drama, full of the old fashioned literary touches that a well-written letter still can deliver in the age of e-mail.

A small movie with a big soul and no easy formula for the happiness of its big-hearted characters.

The pain that's evoked in this small, warm film -- the deep and unspoken yearning of child -- is as universal as it is heartbreaking.

The film works as a highlight tape for the cast and will satisfy any desire you have to be driven to the brink of tears.

There is no unnecessary dialogue, and Auerbach encourages us to listen closely and to study the situation. We are required to learn truths slowly, at the same pace as the characters.

Butler's scenes with Jack McElhone are, like most of Dear Frankie, both unaffected and touching.

With great performances, a simple story, and an original ending, it's well worth watching...

A quietly told film that--by casually tossing in a surprise here and a plot twist there--builds up to an ending that carries an intense emotional impact.

Thanks to some wonderfully open-ended writing and acting, and Auerbach's fine attention to detail, Dear Frankie is one of those rare films that rewards repeat viewing.

This is a little gem of a film.

This is a highly underrated little gem from first time feature director Shona Auerbach. It's a film that shows a real delicacy and understanding for human relationships and a sensitive perception of life in general. Frankie (Jack McElhone) is a 9 year old deaf boy has never met his father. His mother Lizzie (Emily Mortimer) left him years ago but never had the heart to tell her son. Instead, she concocts a story and tells Frankie that his father is working on a ship, sailing around the world. She also sends letters to Frankie, pretending to be his dad in far off places. Her story threatens to come to pieces though when Frankie discovers that his dadâ??s ship is due to dock at their hometown of Greenock. Instead of telling Frankie the truth, Lizzie employs the services of a stranger (Gerard Butler) to pretend that he's Frankie's father. Every now and again you come across a low-key drama with real depth and honesty that when it's all over you are left feeling genuinely touched; a tear may even well-up or for that matter fall. This is that type of drama. It's a film that tugs on the heartstrings but doesn't use any form of manipulation to do so. It's just good, honest, storytelling that uses observation and an understanding of life and the heartbreaking complexities therein. It touches on the extent that parents will go to protect their children and also the difficulties faced by broken, impoverished families. What it also does, is put your faith in the kindness of strangers. That being said, this is not a film that's depressing. In fact, it's quite the opposite. It's a life-affirming story filled with humour as well as pathos and everyone hits just the right note. It's also a film that could claim to showcase the real charm and charisma of Gerard Butler before he hopped aboard the fame train. He's an enigmatic presence and delivers a wonderfully subtle, turn that gained him a lot more recognition amongst critics and filmgoers alike. The same could be said of Emily Mortimer; she is absolutely superb as a supportive but desperate mother striving to protect her son and further excellent support is delivered by young Jack McElhone as the eponymous and gentle natured Frankie. He doesn't physically talk throughout the film but we get to hear his thoughts through the letters he writes to his absent and elusive father. It's through these heartfelt, emotional performances that the film really resonates. That's not to take away from writer Andrea Gibb's endearing screenplay or director/cinematographer Shona Auerbach's sensitive handling of the material though; everyone pulls their weight in capturing just the right tone here. It's a such a shame that Auerbach hasn't made a film since as on this evidence, she certainly has the ability and a 15 minute standing ovation at Cannes would further fuel that. A sweet and poignant little drama with fantastic performances all round. A film with a head and a heart and good feel for the moment.

My heart ached throughout the entire movie. Wonderfully done...

Utterly charming, family drama about a mother who, out of love for her 9 year old son, maintains a deception designed to protect him from the truth about his father. Bittersweet and touching, this film tugs at your emotions, not in a manipulative way, but genuinely, with a heartwarming story. British Shona Auerbach is a director to watch.

A sweet, simple movie in tune with the holiday spirit. The performances are pure heart and portray real, live people without resorting to stereotypes.