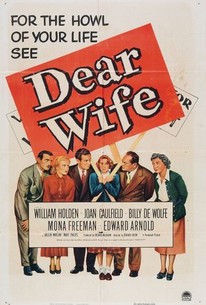 A sequel to 1947's Dear Ruth, this movie has William Holden and Joan Caulfield portraying a young married couple with some definite in-law problems. When Caulfield's younger sister gets Holden to run for the State senate, a whole new kettle of worms is opened--his opponent is his Father-in-law. In spite of former suitors trying to break up their relationship and the obvious stress caused by the campaign, everything works out Hollywood-style. This was followed by a sequel for the younger sister, entitled Dear Brat.

Stanley Stayle
as An Early Riser

Tim Ryan
as Simmons, the Cop

If it's a light, amusing picture of family life you want, then this is your dish.

There are no featured reviews for Dear Wife at this time.