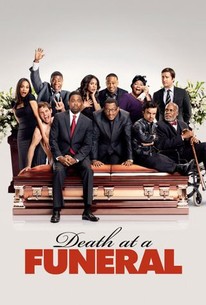 Critics Consensus: It's amusing and it assembles a talented cast, but Neil LaBute's surprisingly faithful remake of the 2007 Frank Oz dramedy ultimately falls short of the original.

Critics Consensus: It's amusing and it assembles a talented cast, but Neil LaBute's surprisingly faithful remake of the 2007 Frank Oz dramedy ultimately falls short of the original.

Critic Consensus: It's amusing and it assembles a talented cast, but Neil LaBute's surprisingly faithful remake of the 2007 Frank Oz dramedy ultimately falls short of the original.

Death at a Funeral Videos

Death at a Funeral Photos

Frank Oz's 2007 black comedy Death at a Funeral is given the remake treatment with an urban spin in this Chris Rock-produced production. When a dysfunctional clan reuintes to mourn the passing of the family patriarch, a respectful funeral quickly turns into an all-out fiasco marked by bitter resentment, blackmail attempts, and scandalous revelations. Dean Craig penned the script for director Neil LaBute (The Wicker Man), with Martin Lawrence, Tracy Morgan, and Danny Glover co-starring. ~ Jeremy Wheeler, Rovi

News & Interviews for Death at a Funeral

View All Death at a Funeral News

Critic Reviews for Death at a Funeral

The result is as uneven as the original, albeit in different places:the drug stuff is hilarious; the toilet humour just yucky.

It's not a great movie, but far exceeds expectation and remains very true to the original film but with a clever African-American slant (which may actually make it even funnier).

While it isn't a shot-for-shot replica, certainly no one can accuse Hollywood of dumbing things down here.

The crackerjack ensemble of actors milks each moment like old vaudeville pros.

The British film wasn't much better. But, beleive me, it was easier to watch than this loud mess.

Depends very heavily on the worryingly unfunny idea of accidentally consuming hallucinogenic drugs, though I have to admit there are a few crassly funny moments...

Most likely to satisfy those unfamiliar with the vastly superior 2006 original and/or those who simply embrace all things Chris Rock or Martin Lawrence.

It remains a mystery to me how a street-smart, wise-cracking comic of Chris Rock's pedigree failed to see the laughter limitations of this remake of Frank Oz's British film, which was equally uninspiring.

What we end up with here is the most pointless remake since Gus Van Sant made his shot-for-shot remake of "Psycho" back in 1998.

A funny film, but it's not one that I found myself growing passionate about as I watched.

If the film is so close to the original as to also be pretty much disposable once its over, at least it as well serves up a healthy amount of laughs during its very brief and brisk run time.

A little more tweaking for the actual actor's voices to come through, instead of trying to put them into pre-concieved places, may have worked better, but on the whole, it's still an excellent example of how the ensemble comedy should work.

Audience Reviews for Death at a Funeral

[img]http://images.rottentomatoes.com/images/user/icons/icon13.gif[/img] Honestly there's nothing wrong with Death At A Funeral that stands out particularly. A sigh of relief considering most Hollywood remakes bring shame to their inspirations. Either way it isn't bad but rather dissapointing, it boasts such a good cast. However the comic talent is far too restrained and frequently underused. It never really rises above the level of simple amusement, and has got very little that stands out, not only from comedy movies in general but also the original film it's based on. The fact that you can't really say much about it goes to show how unremarkable it is. There are a few laugh out loud moments, but the bottom line is despite engaging performances it lacks ambition and true comedic energy to work as a whole.

I see this Hollywood remake from the 2007's British original comedy film, the Anglo mourners were replaced by Chris Rock, Martin Lawrence, Tracy Morgan, Danny Glover and other Afro-American performers, presumably in an attempt to bring corpse comedy to a specific target market in the States. With that eulogy complete, it might shock you - like learning your dead father had a gay dwarf lover - to discover the second Funeral stands up. On its own. Despite very little changing in terms of plot and character arcs, not much effort is required to stop comparing the old and new. Unlike most remakes, this one instantly benefits from its change of location and comedy stylings. While there isn't the predicted onslaught of "daaaaaaaaamn" additions, the shift to Afro-American affectations is subtly effective (without being quite as gut-busting as its source). Rock replaces Matthew Macfadyen as the eldest brother, and his opening jive with an undertaker neatly sets the tone of what's to follow. When Morgan shows up as that neurotic guy who thinks he has a disease, and Zoe Saldana is the girlfriend of the bloke who accidentally drops acid (excellent James Marsden), their personable performances symbolise how Funeral doesn't behave like it's a rip-off. No one channels their British counterpart; even Marsden finds different ways to wig out. When the only constant between the two films - Peter Dinklage - reprises his role as the short-statured man with a big secret, his interaction with Rock and Lawrence has more jest than from whence it derived. Morgan also scores more highly on the rambling-ninny scale than his forebear, although he's helped by getting his hands dirty in one of the only sizeable variations in jokes (here's a hint: wheelchair-bound Danny Glover needs help going to the toilet). Astoundingly, Lawrence isn't as aggravating as a mosquito in your mouth, but he capably slots in as the weak link. Rock tolerates Lawrence's paltry shots at being The Man, just as you'll be able to see past Big Momma and get a fresh kick out of this black comedy replay.

Death at a Funeral Quotes