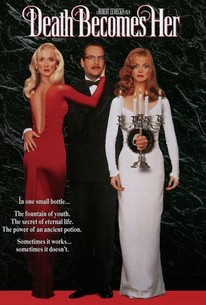 Critics Consensus: Hawn and Streep are as fabulous as Death Becomes Her's innovative special effects; Zemeckis' satire, on the other hand, is as hollow as the world it mocks.

Critics Consensus: Hawn and Streep are as fabulous as Death Becomes Her's innovative special effects; Zemeckis' satire, on the other hand, is as hollow as the world it mocks.

Critic Consensus: Hawn and Streep are as fabulous as Death Becomes Her's innovative special effects; Zemeckis' satire, on the other hand, is as hollow as the world it mocks.

Two female rivals drink a magic potion from a beautiful enchantress that promises eternal youth. However, after they kill each other in their battle for the man they love, the potion revives them as the undead; and they are forced to maintain their deteriorating bodies forever.

Carrie Yazel
as Girl at Dakota's

Michelle Johnson
as Anna
View All

Critic Reviews for Death Becomes Her

The target of the movie's jokes is female vanity, but since Zemeckis exhibits not a trace of affection for the actresses (or for any of the men, either), one feels humiliated merely watching his crude-spirited wit.

This new horror-comedy has to be one of the most heartless mainstream pictures ever made.

If there were something resembling genuine satire of human behavior beyond the simple pretexts for fancy special effects and relentless sadism, I might have found some of this funny.

Insistently grotesque, relentlessly misanthropic and spectacularly tasteless, ''Death Becomes Her'' isn't a film designed to win the hearts of the mass moviegoing public. But it is diabolically inventive and very, very funny.

An elaborate piece of work with more than a little on its nasty mind, "Death" finally falls flatter than many a less ambitious film, proof once again that just because an idea is audacious doesn't necessarily mean it's good.

Meryl Streep shines in a glitzy black comedy, but it's still She-Devil with a make-over.

Its stars [are] easily able to keep pace with its big dramatic beats, and Zemeckis directs with the confidence essential to comedy. Death Becomes Her doesn't pull any punches. Hollywood deserved it, and so do you.

This is a 100 percent Hollywood story... It's not relateable to the average person.

The dizzy, desperate energy of the way she portrays Madeline Ashton is so unlike the staid regality of say, her Julia Childs or Margaret Thatcher.

It's the f*cking best!

Every scene that Streep and Hawn play together has a bold spark indicative of the symbiosis between females with the same goals and ambitions.

Audience Reviews for Death Becomes Her

Dark, dark, dark comedy, enhanced by FX and the manic performances by the two unlikely leads (whoda thunk of Streep and Hawn as a comic duo??? But the girls work work work it!) that asks the age old question: "so you really want to live forever?" Think bitchy on steroids. Its a fun piece, a commentary on the obsession on youth and beauty, with a eerily grand performance by Isabella Rossellini at the center.

A film about rich and famous folk trying desperately to cling on to their youthful looks by any means necessary, well mainly women in this case. Gee not too far from the truth really is it, seeing these two aging Hollywood female stars, neither of which are particularly attractive in my book, acting narcissistic egotistical and spoilt whilst under thick layers of makeup. I think the trowels of makeup are the only way these two can achieve any remote level of beauty frankly. The plot is all about a magic potion that...errr magically turns people into younger firmer versions of themselves and gives you immortality. A potion of youth and eternal life, but the trick is you must disappear from public view after ten years to keep the secret...errrrrrm secret, yeah. So naturally you can expect the cliched spectacle of seeing various ultra famous people popping up who have never really died from the public eye, forever immortal stars people wanna believe are still with us eg. James Dean, Marilyn Monroe, Elvis etc... The first thing that hits you is how can this supposedly sexy siren (Isabelle Rossellini), who's real age is 71, keep this amazing secret under wraps in LA of all places!. She has dished it out to so many famous people who all abuse their fame it seems, its incredible she hasn't been discovered. She's an illegal magic potion dealer with muscle bound henchmen who are also all on it. I would of thought it might also get harder to hide this when people die and start to walk around like decaying zombies as we see slowly with the main two characters. The other niggling bit is where exactly does she get this potion from? she seems to have quite a lot of it, does she make it in the basement?. And while I'm on it, her massive mansion, is that suppose to be 'disappearing from the public eye'?! really?? I mean seriously you couldn't get anymore attention if you tried!, the house is a freakin' castle!. Yes the films plot is totally full of holes but I guess its not suppose to be remotely serious, just a silly fantasy. To a degree it does work, this is mainly down to the terrific special effects that at the time were virtually groundbreaking. It was quite good ghoulish fun seeing Streep and Hawn battle it out 'Beetlejuice' style with all the undead goofiness. Willis doesn't really do much accept scream the whole time and the sets have a nice modern gothic style accompanied by crashing lighting and thunder, which is cool for all the goths out there (like myself). When it came out this was a pretty big hit as I recall, stayed in the cinema a while and I did enjoy it when I saw it (at the cinema, mum LOVED it!). Looking back it doesn't really hold up, sure the effects are still quite neat and there are some amusing bits, but generally its so stupid, lame and completely makes no sense...which ruins it in the end. Its pretty much a live action cartoon with a wafer thin plot, the poster is also a complete rehash of 'The Witches of Eastwick', best stick with that movie though.

Yeah, it's a bit dated now, but it's bitchy and entertaining with some decent effects for its age.

Funny black comedy. Bruce has an affair with Goldie. She plots to kill his wife Meryl. Both women are aging but they discover an immortality potion. Great cast. Great special effects for its day.