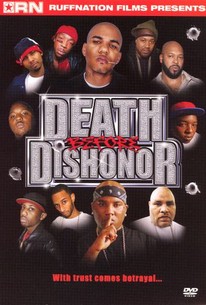 Viewers are offered a behind-the-scenes look at the "Stop Snitching" campaign in this documentary that speaks with prominent members of the hip-hop community about law enforcement efforts to undermine powerful crime syndicates by employing confidential informants. What began as a simple t-shirt slogan has subsequently exploded into a nation-wide movement that many have criticized as nothing more than organized witness intimidation that effectively encourages criminal behavior. Now the biggest names in rap music have come together to debate whether the "Stop Snitching" movement is simply a street-savvy code of honor and dependability, or a desperate attempt for criminals who fear betrayal to justify their unlawful behavior.

Critic Reviews for Death Before Dishonor

There are no critic reviews yet for Death Before Dishonor. Keep checking Rotten Tomatoes for updates!

There are no featured reviews for Death Before Dishonor at this time.