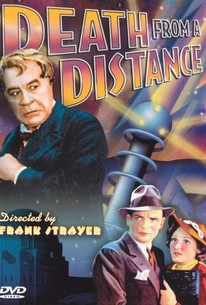 Eccentric professor Einfeld (Lee Kohlmar) is lecturing a select group of scientists at a darkened planetarium when one of the spectators is shot to death. Homicide detective Ted Mallory (Russell Hopton) can't get a straight story from the witnesses and refuses to allow reporter Kay Palmer (Lola Lane) to file her story until he can determine the direction from which the murderer fired the shots. Kay manages to phone in her story anyway, putting Mallory on the spot with the DA. Burying the hatchet, Mallory and Kay combine forces to nab the killer and expose his diabolically clever method of firing a gun without being present in the room! Though filmed on a tiny budget, Death from a Distance is an impressively spooky whodunit, benefitting immeasurably from the special-effects expertise of Jack Cosgrove.

Hal Price
as Detective
View All

Critic Reviews for Death from a Distance

There are no critic reviews yet for Death from a Distance. Keep checking Rotten Tomatoes for updates!

Audience Reviews for Death from a Distance

This mystery movie does have a genuine mystery, but it was so boring, I didn't really care.

Death from a Distance Quotes