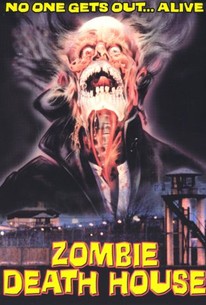 In this graphically violent exploitation film, an insane colonel tests out his newly invented virus, HV8-B, designed to significantly alter the behavior of convicts serving life sentences. As soon as they are injected, the unwilling subjects become mad-killers. Later they become slimy walking corpses in various states of decay, constantly oozing highly contagious bodily fluids that infect the whole cellblock. Soon the uninfected inmates begin to riot. Now only wrongly-imprisoned Vietnam-vet Dennis Cole can stop the crazed colonel from turning them into killer zombies. Meanwhile, blonde biochemist Tanya works to find a vaccine to stop the terrifying erosion of humanity.

There are no critic reviews yet for Death House. Keep checking Rotten Tomatoes for updates!

An overall mediocre exterior of acting and plot premise, but with some great zombie gore moments. Has some really great atmospheric moments that a zombie fan must see. Some zombie fans hold this film in cult status, but I wouldn't go that far.