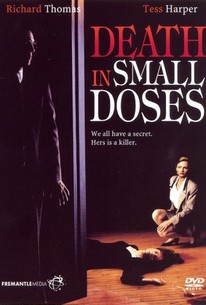 Based on a well-publicized 1991 Dallas murder case, the made-for-TV Death in Small Doses begins with the death of architect Nancy Lyon (Glynnis O'Connor), who has succumbed to arsenic poisoning. The prime suspect is Nancy's frequently estranged husband Richard (Richard Lyon), who stands to collect an enormous insurance policy. Nancy's family pressures the local authorities to prosecute Richard--and never mind that virtually every person in that family also seems to have had substantial reason to wish Nancy dead. But Richard plays a trump card when he supplies evidence indicating that his wife actually committed suicide--a move that proves to be a thrown gauntlet to relentless Assistant DA Jerri Sims (Tess Harper). Filmed in 1993, Death in Small Doses did not air on ABC until January 16, 1995. The film was directed by actress Sondra Locke, best known at the time for her long association with Clint Eastwood. ~ Hal Erickson, Rovi

There are no critic reviews yet for Death in Small Doses. Keep checking Rotten Tomatoes for updates!

We all have a secret. Hers was a killer. Great Movie based upon true story.