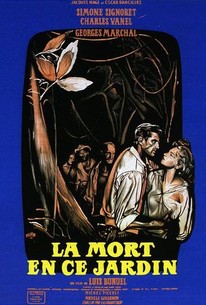 To those confused by the seemingly nonexistent titles Gina and Evil Eden in the manifest of director Luis Bunuel, we will attempt to clarify: Both of these titles are alternate names for Bunuel's 1956 Diamond Hunters, a French/Mexican production originally released as La Mort en ce Jardin in France and La Muerte est En Jardin in Mexico. Both titles can be literally translated as Death in the Garden--which is yet another alternate title for this modest little escapade. The film is one of the most accessible and linear of the director's works: it is an austere tale of refugees from various oppressive societies who seek the means to escape. All of the principals converge in an idyllic South American rain forest, only to succumb to greed while hunting for a diamond mine. The fact that tragedy lurks within the forest explains the title Evil Eden, while the presence of Simone Signoret explains the title Gina. ~ Hal Erickson, Rovi

Raúl Ramírez
as Alvaro
View All

Death in the Garden is a kind of halfway house for the film genius, made when he had yet to receive the acclaim that would give him full control of his movies, but after he had been taken seriously enough by the money men.

No masterpiece, but a prime example of subversive cinema.

Though belonging to the oft-overlooked Mexican phase of Buñuel's career, Death in the Garden is nonetheless as caustic and vicious as anything he ever made.

...a subterfuge film from Buñuel, in which his style and politics are subsumed within genre trappings.

Luis Bunuel's rarely seen "Death in the Garden" (1955) is a survivalist suspense film with a subtle dose of political and religious commentary.

... a wonderfully cynical thriller filled with brilliant Bunuelian flourishes and a grim sense of futility.

One of the masters of cinema continually thrills because he grabs us from the outside (i.e., through social commentary) and the inside (by tapping into the psychological).

Spanish-born director Luis Buñuel had such a distinctive style and outlook that even his minor films are fascinating to watch.

It's not an obvious artistic masterpiece, but it is a case of a brilliant, talented director making the most out of a routine project.

There was some "lost classic" hype buzzing around "Death in the Garden," when the film was belatedly released on DVD last year. Sorry to say, the hoopla is not earned. I had a harder time sitting through this than any other Luis Bunuel film I've seen, and I've seen most of his less appreciated works. And people try to compare this with "Aguirre, Wrath of God"? The heart of the plot is a small, eclectic band of people tramping through the jungle, trying to escape a South American village governed by a corrupt police force. The group includes a priest (Michel Piccoli, in his first of seven Bunuel pictures), a prostitute (Simone Signoret), a macho outsider (Georges Marchal), a deaf girl and her cook father. The main problem is that the film takes about 50 minutes to arrive at this point. Before that, the story just wanders around the village, establishing characters and the fundamental conflict: a riot brewing after the police seize the diamond mine that provides everyone's livelihood. There is one notable flash of perversity, however: Marchal's character, Shark, enters the film by casually flipping his middle finger at the troops. A somewhat shocking inclusion, by 1956 standards. Once the central characters are on the run, the story becomes a bit more interesting. The fugitives turn punchy with exhaustion and hunger, and a more primal clash of personalities emerges. Signoret has promised herself to the cook, but only because of the money he has stockpiled to open a restaurant. But she has second thoughts, and starts feeling drawn toward Marchal instead. Piccoli tries to be a calming presence, but is predictably ineffectual (this is a Luis Bunuel film, after all). The five hope to sail away to Brazil, but their internal tensions may become more of an obstacle than the police pursuing them. All this sounds much more compelling than it is. It's one of Bunuel's earliest color projects, and plenty of gun action helps cover the incongruity of a Spanish director making a French-language film about South America. And there are two subversive insertions which can't be missed: a memorable image of a large snake being swarmed by fire ants (Bunuel always loves his insects!) and a strange, delirious anecdote from Piccoli about an old seminary classmate who liked to eat soft-boiled eggs. But the first half's tedium can't be overcome and, in the end, "Death in the Garden" doesn't feel like much more than a second-rate adventure movie.

It's "The Exterminating Angel" with a jungle setting, with characters being pray to their surrounds and revealing their real personalities to the audience an to each other. The colour cinematography is quite striking, especially when you have a very blonde and very dangerous Simone Signoret in red lisptick.

In "Death in the Garden," the military of a South American country is ordered to nationalize the diamond mines and has given a day for everyone to clear out. In response, they go to talk to Captain Ferrero(Jorge Martinez de Hoyos) who surprisingly agrees to a meeting but only on the condition that they leave their guns outside. This they will not do and a small gunfight erupts, with the miners fleeing in the wake of superior firepower. After the smoke clears, Chark(Georges Marchal) gives the soldiers a one finger salute. He treats Djin(Simone Signoret) better before she rats him out to the local authorities. With his film "Death in the Garden," Luis Bunuel makes a logical case for the randomness of the universe and against a higher power while also ironically making use of a deus ex machina. How else do you explain a priest(Michel Piccoli) on a fool's errand who is better dressed than anyone else? The military might be in their rights to kick out the foreigners who only seek to exploit the mineral wealth of their country but they are horribly brutal in their methods. The disparate group of characters at the heart of the movie, as more than one character points out, is all in the same boat, literally and figuratively, no matter their respective sins.