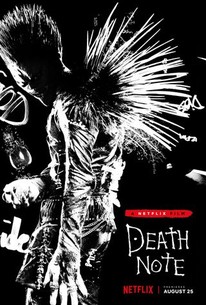 Light Turner, a bright student who stumbles across a mystical notebook that has the power to kill any person whose name he writes in it. Light decides to launch a secret crusade to rid the streets of criminals. Soon, the student-turned-vigilante finds himself pursued by a famous detective known only by the alias L.

Netflix's Death Note fails Asian-Americans in the more mundane way that most Hollywood releases continue to .

A project that feels both overdetermined and underdeveloped.

Director Adam Wingard has robbed Death Note of its identity, messing up nearly everything that made the original series so compelling.

Death Note is a whitewashed, hasty, and vapid adaptation that offers one great performance, few thrills, and lots of missed opportunities.

The ending will have you switching off your Netflix app in disgust. If you don't die from boredom before you get there.

In trying to translate so much mythology into just one 100 minute movie, an awful lot is lost but given the sorry state of the horror genre, even the vaguest of glimmers is worth something.

...even if we judge Death Note on its own virtues instead of as an adaptation, it falls pathetically flat.

Death Note can't escape the fact that it is utterly ludicrous

Death Note is fairly emo and Twilight-y (thought thankfully not as mind-numbingly serious) but Wingard's horror credentials are front and centre in the film's unexpectedly gruesome deaths.

The Netflix adaptation feels like the Final Destination franchise and Dawson's Creek had a regrettable affair together and Death Note is the aborted baby that they attempted to sweep under a back alley dumpster to keep hidden from the rest of the world.

'Death Note' is what happens when you take a filmmaker with such a great personality as the good Wingard, you give him fifty million dollars and, more importantly, total creative freedom. [Full Review in Spanish]

As someone with no previous affections for this series, Wingard drew me into this world; one which, previously, I didn't even care about, that I might like to see more of.

Whilst being a hardcore 'Death Note' fan since the age of 17, my expectations for this particular film adaptation of Tsugumi Oba and Takeshi Obata's best selling manga series were very low to say the very least. Director Adam Wingard shows he has a clear vision for his film adaptation, though for the most part it feels incredibly underwhelming, especially at how complex and investing the original Death Note manga and anime were. The film adaptation itself is reduced to being subjugated by plenty of petty little American tropes, campy cringe-worthy horror cliches and an annoying romantic subplot followed by plenty of over-dramatic moments and terrible soundtrack choices that doesn't compensate to the original source material. Performances from the actors were sub-par to say the very least, nothing too special or even broadly appealing to fans and non-fans alike. Wilhelm Dafoe however, is excellent unsurprisingly as Ryuk the Shinigami; its another one of those rare cases where you have a small element in the film worth seeing even with what little he has. Other than that, the film just wasn't that good at all, I'll give credit to the cinematography looking sleek and stylish, though it this film's Americanization it's losing the compelling and complex edge that made the source material amazing in the first place. It's all too easy to say it's overall; an underwhelming adaptation as it's an underwhelming film, I wasn't too surprised given the odd approach and the questionable choices to the various changes this film made in terms to the source material, it's doesn't stack up at all except upon scratching the surface and not digging deep enough.

Why didn't they just slap some eyeshadow on Willen Dafoe?!? Not terrible, but stylistically over complicated, in every way. Should have been done as a series with better actors and less melodramatic lighting and production design. Impressive, especially for a cultural port which are almost universally terrible, but just off.

Excluding Manga adaptations such as Edge of Tomorrow or the rare occasion of an anime adaptation slightly working on a film like Speed Racer, adapting anime and bringing it to America in live-action form has always seemed to be a struggle. Death Note is the latest attempt to bring an obscure premise to the English-speaking public, and while I'll admit that I enjoyed most of this adaptation, the film itself isn't that great. I would love to see the day when a filmmaker takes ideas from source material and reworks it to fit a feature-length film. Yes, that's exactly what director Adam Wingard does here, but he also attempts to cram in many of the large plot points from all of season one of the television series, which can feel quite rushed. None fans may enjoy this film more than fans of the anime, but here is an unbiased review from someone who has seen and loves the original material. Beginning with a very rocky start, Death Note takes quite a few liberties, getting you sucked right into the plot within the first few minutes. Light Turner is a troubled student who comes across a notebook that falls from the sky, allowing him to kill anyone he chooses, simply by writing their name and remembering their face. This core premise remains intact from the original source material, but there are far too many subplots stuffed into this film. This does keep the movie moving along at a solid pace, but unless you're paying very close attention, you may find yourself lost. From introducing the death God in Ryuk (played very well by Willem Defoe if I may add), to unveiling "L" in order to track down Light, to then having everything unravel by the end, leaving the conclusion of the film to be a huge cliffhanger, it really does feel like a very short season of a television series. For these reasons, it doesn't quite work as a film, but they do many things right to make up for this. When it comes down to it, if you can't find yourself invested in the characters, then you may just end up not caring about any of the consequences. The best thing this film accomplished was in its casting. Sure, characters like Mia (played by Margaret Qualley) were completely uneccessary and kind of took away from the final product in my opinion, but Light was decently cast in Nat Wolff, Willem Dafoe as Ryuk was spot on, and Lakeith Stanfield as "L" kind of blew my mind. I was sucked into his performance just as I was when watching the original anime. The changes of race didn't bother me, because they clearly chose him for his acting abilities, which were through the roof. Sadly, although they accomplished these aspects wonderfully, they aren't utilized enough. After viewing this film, my compliments continue to be through the roof for the casting of Ryuk and "L," but so much of their storylines are brushed over throughout this film, and it will even be obvious for newcomers. They're only brought into the forefront when the story demands it, leaving no other development or exploration into their psyche, which is what the anime did beautifully. Again, I don't want to compare this to the anime, so I will simply state that there isn't nearly enough character development to make you care too much about certain characters. The saddest portion about this film as a whole is the fact that the most interesting parts involve the interaction between Light and Ryuk, but they don't share enough screen time together. The attempt at making this a feature film are definitely present, but there is so much more they could've done. In the end, the story itself is still great and the do touch on the elements that made the anime so great, so I can't really hate on this movie at all. Sure, they take a lot of liberties and it doesn't quite work as a feature film, due to the fact that they cram in so many story elements, but I found myself enjoying it for what it was. This version of Death Note is very lean in terms of its mere 100 minute running time (which could've easily been 30 minutes longer), and it really should've been longer, but there are some standout moments to remember. Death Note may not be a perfect adaptation, or even the one that fans deserved, but the story is told well enough to become invested and the score really sucks you in, just like the anime did. There are some weird editing choices and strange music additions to the movie, but the direction by Adam Wingard feels inspired and the imagery was very well presented on-screen. This isn't a great movie, but its worth a look and I'm actually curious as to where they would take a sequel if they decide to proceed. Recommended to newcomers with an open mind, and mildly recommended to fans, especially if you have a very open mind in terms of change.