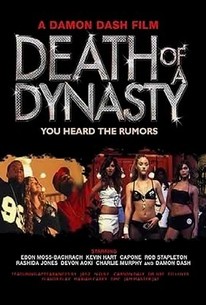 Death of a Dynasty Photos

Hip-hop mogul Damon Dash (Paper Soldiers) directs this semi-autobiographical film based on his life as the proprietor of Roc-a-Fella Records. Ebon Moss-Bachrach stars as David Katz, a reporter who, upon interviewing rap producer Damon (Capone), finds himself drawn deeper and deeper into the high-class world of hip-hop. Before he knows it, Katz ignites a war within the label that could bring down the operation for good. A bevy of celebrities from all walks of life make appearances, including Riddick Bowe, Lorraine Bracco, Mariah Carey, Sean "P. Diddy" Combs, Carson Daly, Jay-Z, Chloe Sevigny, James Toback, and countless others.

Chloë Sevigny
as Sexy Woman No.1

Kari Wuhrer
as Sexy Woman No. 2

Jamie-Lynn Sigler
as Sexy Woman No. 3

Joel Garland
as Bouncer No. 1

note
as Bouncer at Lotus

Critic Reviews for Death of a Dynasty

Half home movie, half product placement, and almost completely worthless.

This narcissistic mockumentary is less a film than a full-length promotional video for Roc-a-Fella Records mogul/director Damon Dash.

A mockumentary that veers unsteadily between satire and an infomercial for Dash's Roc-A-Fella records.

Watching Damon Dash's playful movie is like entering a room where a large, too noisy party is going on and never fully adjusting to the dark or the din.

Death of a Dynasty is, like the music it parodies: aggressive, over-the-top, louder than life and in your face.

There is a funny movie to be made from the outrageous egos and excesses of rap music. Death of a Dynasty is not that movie.

Death of a Dynasty is fun stuff, and this is coming from a guy who hasn't bought a hip-hop CD since NWA broke up.

Truly terrible for plenty of reasons, not the least of which being Damon Dash's barely competent directing.

Death of a Dynasty accomplishes what it set out to do -- to make a few laughs.

Sure, having bottles of Armadale vodka crammed into every other shot could be read as a pointed swipe at crass endorsements of luxury liquors. But when you know Armadale is owned by Roc-A-Fella, it looks a lot like crass product placement.

Definitely funny as the hip-hop world pokes fun at itself and others, but it's frequently pointless, especially as the "plot" unfolds.

Dash is a good sport in poking barbed fun at the PR machinations of today's music business.

There are no featured reviews for Death of a Dynasty at this time.

Death of a Dynasty Quotes