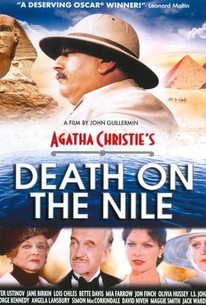 Death on the Nile Photos

Peter Ustinov plays the intrepid Belgian sleuth Hercule Poirot in this star-studded and stylish screen adaptation of Agatha Christie's classic mystery tale. On a trip down the Nile, a hateful and arrogant heiress is murdered and any one of a boatload of celebrity suspects, all with motive and something to hide, may have committed the deed. Amongst the suspects are Angela Lansbury as a ditzy romance novelist; Bette Davis as a snobbish socialite with Maggie Smith in tow as her embittered friend; Jack Warden as a comic Swiss doctor with a music hall accent; and Jon Finch as a rabid Marxist. Also on hand to help out is David Niven as Poirot's pal, Colonel Race.

I.S. Johar
as Manager of The Karnak

Critic Reviews for Death on the Nile

Death on the Nile is an admirable addition to the Christie-on-film canon with a cast of game, if sometimes hammy, actors and just the right amount of murder, mystery and mayhem.

The intricacies of the plot, the top production values, and a splendid cast add up to stellar entertainment.

Once it gets going, Death on the Nile is bright and leisurely, like a vacation, and the notes of humor are enough to keep things from getting too heavy.

It takes an uncommonly long time for murder to actually transpire and director Guillermin has not known how to take up the slack.

There is not one likeable character among the extensive cast, which results in the logical reaction of being indifferent to the plot and its development. [Full Review in Spanish]

The way the investigation plays out is more dynamic than that in Orient Express, with less of a focus on interrogation only and more twists and turns to come, and the ending is very satisfying.

A fine Agatha Christie adaptation, made more watchable because of its all-star cast

Death on the Nile is a fine entertainment that is lovely to look at and easy to enjoy.

Not bad if a bit dry.

Okay whodunit suffers by comparison with Murder on the Orient Express.

Audience Reviews for Death on the Nile

Great locations (that may not even be available for filing these days), really great costumes, thrilling story with a surprise ending. What more could you want?! Lansbury is marvelously over-the-top as a faded lush. Ustinov really is the best Poirot ever bringing both humor and gravity when needed. On the down side: Niven plays his usual, shallow stock character; and the poorly-rendered foreign accents are a bit distracting. (I'm looking at you, Jack Warden!) Bette Davis struggles a little, but she still pulls it off. Despite the minor faults, it's a thoroughly enjoyable film.

Not nearly as good as Murder On the Orient Express, even a step down from Evil Under the Sun, but colorful Christie tale with fine production values and a good cast with Angela Lansbury, Bette Davis and Maggie Smith standing out. One of the problems is overlength another is a too deliberate pace but if yo're a mystery fan still a worthwhile watch. Ustinov of course is perfect as Poirot.

This is pretty great TV Movie based upon the Novel written by Agath Christie with late Sr.Peter Ustinov and Angela Lansberry as a Alcoholic widow. It was funny to see Lanburry as an Alcoholic.

It's an old-fashioned Whodunit which IS a bit dated, but the story is still good

Death on the Nile Quotes