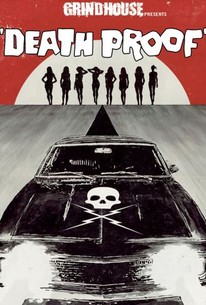 Critics Consensus: Death Proof may feel somewhat minor in the context of Tarantino's larger filmography, but on its own merits, it packs just enough of a wallop to deliver sufficiently high-octane grindhouse goods.

Critics Consensus: Death Proof may feel somewhat minor in the context of Tarantino's larger filmography, but on its own merits, it packs just enough of a wallop to deliver sufficiently high-octane grindhouse goods.

Critic Consensus: Death Proof may feel somewhat minor in the context of Tarantino's larger filmography, but on its own merits, it packs just enough of a wallop to deliver sufficiently high-octane grindhouse goods.

In Death Proof -- director Tarantino's take on such peddle-to-the-metal shockers as White Line Fever -- Kurt Russell stars as an engine-revving psychopath who prefers to take out his beautiful victims at 200 mph. Originally released into theaters on a double bill with Robert Rodriguez's Planet Terror under the Grindhouse banner, Death Proof finds a group of ladies out on the town pitted against a mysterious figured named Stuntman Mike (Russell), whose vintage automobile has been partially modified to withstand even the most extreme auto collision. Though the maniacal driver himself always comes out relatively unscathed, the same certainly can't be said for the poor young lass in his passenger seat -- or anyone unfortunate enough to be on the road when the urge to kill strikes for that matter. With a list of potential road-kill candidates that includes Rose McGowan, Jordan Ladd, Rosario Dawson, and Vanessa Ferlito, Death Proof takes viewers on an adrenaline-infused drive that's as sexy as it is shocking. ~ Jason Buchanan, Rovi

Quentin Tarantino
as Warren, Warren the Bartender
View All

Which Tarantino Film Do Critics Like the Most?
Five Favorite Films with Zoe Bell
Top Ten Death Proof Exploitation Films: the films that wouldn’t die.

Death Proof is superbly made. There's a terrible tension watching these beautiful and spirited young women getting too close to the flame, followed by enormous relief when the mood changes in the second story.

The dialogue with which Tarantino is usually adept is disastrously clunky, the filmmaking largely without flair and even the apeing of the smears and scratches of the schlock originals seems ridiculous.

This blend of girlie action flick with retro car-chase movie scores nought out of 10 for artistic expression but four for amiable delinquency.

A horror-comic splatterfest set in 2007, but somehow filmed in 1972, about a posse of women taking revenge on a murderous, misogynist stunt-driver.

The appalling dialogue, mostly about the sexual predilections of his half-naked female cast, is so garbled, spotty and tedious that it fails to sell interest in a single character.

Don't get me wrong, I didn't detest Death Proof, I just feel that it came up short on what was promised. Maybe the film was over hyped and maybe I'd built myself up for it to match my expectations.

It's very character driven, it's very action and thrill driven, it also has a really interesting aesthetic.

All Tarantino's faux grindhouse tics that he evidently thinks are so amusing are present, but it's not a particularly rewarding conceit to frame a movie around.

By the end of the film, Tarantino delivers on the action with a car chase that will get anyone's engine revving.

Death Proof doesn't simply comment on its genre inspirations - it adds to their very legacy.

A delightful homage to exploitation films of the '70s, and it is especially amusing thanks to the way it mixes the visual elements of those movies with modern ones, but Tarantino gives in once again to his narcissistic self-indulgences in endless, tiresome exchanges of dialogue.

Tarantino's exercise in slasher-type thriller is almost hypnotic in its first half, but really seems to lose its touch as it goes on. Kurt Russell is great in the lead role, even if his creepy allure is lost in the films' final third. Satisfyingly thrilling and cleverly shot, 'Death Proof' may be one of Tarantino's weaker films, but it's still a terrific ride. A great ode to grindhouse cinema and italian slashers.

Combined with Planet Terror, it makes for a cool film. I would have to say that I liked this one more (maybe my Tarantino bias) because the events in the movie could actually happen in real life. I guess i'm a sucker for realism.

While Planet Terror absolutely wallowed in the essence of grindhouse cinema, and had much more action, Death Proof is more reverential and salutory, and captures the spirit of grindhouse much better. Dialogue consumes most of the running time (of the Grindhouse double feature and single film extended version), and while it is very reminiscent of past QT works, and has a lot going for it, it is not as great as the dialogue of works like Pulp Fiction and Reservoir Dogs. Kurt Russell is terrific as Stuntman Mike, and both sets of girls put in decent performances as well, even though some might call them crappy. The way I see it, the film was never planned to be Oscar-worthy, so expecting that kind of thing is asinine. The 4 shot death sequence and the final half hour (extended cut) are the best parts- especially the "ship's mast" and chase sequence finale bits. As always with a Tarantino film, the retro soundtrack is unparalleled in both it's overall brilliance, and in its usage. There are lots of gems that QT picked that would make any collector of obscure retro music have an audio orgasm. All in all, a fun, though lesser work.