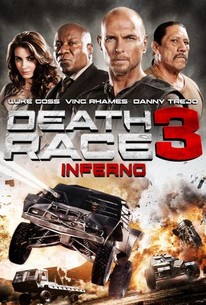 Repentant convict Carl Lucas (Luke Goss) - aka Frankenstein - is a legendary driver in the brutal prison blood sport known as Death Race. Only one victory away from winning freedom, Lucas is plunged into his most vicious competition yet: the first ever Desert Death Race. Through South Africa's infernal Kalahari Desert, Lucas is pitted against ruthless adversaries and powerful forces at work behind the scenes to ensure his defeat. Also, starring Danny Trejo and Ving Rhames, Death Race 3: Inferno is an insane, action packed thrill-ride.

Hlubi Mboya
as Diabolos
View All

Watching Death Race 3: Inferno is a lot like a casual viewer taking in the Indianapolis 500. Watching the cars go around is ok, but what puts butts in seats is the threat of wanton destruction, and there's plenty of it here.

Inferno absolutely pulls ahead of Death Race 2 as far as the Death Race franchise is concerned, but that's not hard when your competition comes in at an uncontested dead last.

"Death Race 3: Inferno" is like a monster truck rally. People go to see mayhem. And, people who like the "Death Race" movies are also watching to see the stunts. They don't expect a good story. Thank goodness.

Ask it no questions and it will tell you no lies: a fair bargain that too many other films on this level resolutely refuse to grant.

Feels like the unkempt offspring of Lock Up, Mad Max, and The Cannonball Run. Only not as good as those movies.

My my what have we here...another straight to DVD sequel, should I be excited? Well seeing as the first film was actually quite good fun and the second was semi decent fun if rather uninspired, I guess this could be good. Oh but its not...bugger. So the plot, well I'm confused, yes believe it or not I am. According to Wikipedia the second film was a prequel to the original...eh? never got that, and this third film is an alternative timeline sequel to the original that follows on from the second...wha? As far as I see it Statham was Frankenstein in the first film and he escaped. Goss then got burned up in the second and took on the mantle of the MIA Frankenstein character, and now he continues that role into this third film. Well that's how I see it dagnabbit. So the usual videogame-esque appearance/ideas from the previous films remain naturally, that mixed with the stupid 'Gladiators/WWF' style setups and intros. The first two films get away with this but it now grows old plus this film does look much more tacky with obviously less money behind it, outside of the car sequences anyway. RAZOR!!! 'watch out for him, he used to be a killer somewhere', oh so I guess he's the bad guy then, well he must be with a name like that, scary! JOKER!! oh I guess he must...ah you get the picture surely! The acting is of course ropy but we all knew that, you don't watch films like this for acting skills. Impressive how the continuity has been kept with all cast being retained from the second film, adds a much needed boost to the quality. Its a damn good job Tanit Phoenix looks good cos she sure as hell can't act a tall, her fight choreography is abysmal too. In fact all the fight sequences look terrible and badly constructed, clear misses everywhere, so tame and not required. The biggest laugh of the film is a sequence where all these scantily clad women must fight to the death for the honour of becoming navigators to the male racers!. If ever there was a more obvious ploy to appeal to the wank happy young male viewer, well I haven't seen one this blatant for some time. Lots of women in nothing but hot pants and bras looking like something out of 'Xena Warrior Princess' all cat fighting and chopping each other up whilst getting blood spaying over their large plump bosoms. So so so stupid, not really sexy a tall (although clearly meant to be) and utterly pointless. Gee lets attract more fans simply by sticking in lots of half naked women in a mass killing orgy, plot relevance?...what's that mean? Pssst...Katrina from the previous film is one of the winners, oops! what do you mean you didn't see that coming?! So yes its your typical 'Running Man' 'The Condemned' 'Battle Royale' 'The Hunger Games' blah blah blah you know. The problem here is we really didn't need yet another film of virtually the same shit all over again, accept this time its in a desert and with even more extreme camera jumping and editing. Seriously the camera cuts from one action shot to another so fast and often it will make you dizzy. Nothing new, same cliches, same outcomes, same implanted body tracking devices, same visuals, same character types but with more half naked women and new cars (why are some guys driving trucks? surely they would be reeeeally slow in the sand? especially with large gun turrets on the back). Man I lost interest when the gorgeous blonde driver got killed off. Funnily the car interiors are so complex looking I fail to see how anyone could drive them at break neck speed whilst trying to faff around with all the intricate touch screen monitors and controls. But I guess reality isn't on the menu here is it, I could go on but there really is no need. A videogame disguised as a film franchise, watch out for the next sequel set on snowy terrain...probably. 'Its a beautiful day to DIE!'

Third entry in the Death Race franchise expands the plot even more and now Death Race is a global phenomenon. Building on the plot of the prequel, this one offers more action that for a Straight to DVD release that is pretty good and works well as a mindless entertaining action flick. Acting is decent at best, while the plot is good, but leaves room for improvement. It's funny the big theatrical debut of Death Race was a mediocre affair, but the sequels are better and are more interesting as well. I personally view the sequels as fine B movies that are done right. This is a chaotic and pleasant hour and a half that fans of this series should check out. I really liked the film, and it overcomes its flaws, by having an interesting plot and good action scenes that for a low-budget feature are pretty well done. This film is much more fun than the original Death Race starring Jason Statham and along with the second one, is a film worth checking because the filmmakers were able to create something worthwhile for action fans. I love action flicks, and I'm usually skeptical about Straight to DVD titles, and rightfully so, because most of the time, they are poorly made films with awful stories and poor directing and acting. But with Death Race 3, you have a film that will certainly surprise any film lover who love mindless action, but are unsure with these films released direct to DVD. Death Race 3 is not a perfect film, and it has plenty of flaws, but like the second one in the trilogy has an interesting plot that compliments the mindless on-screen carnage. Along with Death Race 2, this is a guilty pleasure that is among the better titles released Straight to DVD. Death Race mediocre, but with the second one, they started to really create interesting concepts, which are appealing and ultimately fun.

Mindless Action. Good Movie! If you didn't like the original mainstream Death Race or its sequel, don't bother watching this. Now if you liked what the B-movie sequel brought to the table then this movie may be worth watching only to see the loose ends get chained up, literally... while also being slightly hard to watch. Dialogue, concept, and execution are poorly done. The only thing it does right is finally connect the previous films- if not through insane conditions. Its entertaining at least if you turn off your brain and watch the conclusion unfold. Convicted cop-killer Carl Lucas, aka Frankenstein, is a superstar driver in the brutal prison yard demolition derby known as Death Race. Only one victory away from winning freedom for himself and his pit crew, Lucas is plunged into an all-new competition more vicious than anything he has experienced before. Pitted against his most ruthless adversaries ever, Lucas fights to keep himself and his team alive in a race in South Africa's infernal Kalahari Desert. With powerful forces at work behind the scenes to ensure his defeat, will Lucas' determination to win at all costs mean the end of the road for him?

Considering the film is a continuation of Death Race 2, the 100 minute story doesn't have to worry about a ton of buildup. Instead, it finds the time for a solid amount of racing with fillers in between. To top it all off, there is a decent plot twist to sum everything up.

The speed factor of the death race is taken away in this picture, but the off-road concept of the races proves to be an intriguing factor, complete with a variety of underdeveloped characters and vehicular destruction.

Luke Goss does enough to carry this film while Tanit Phoenix provides a breadth of fresh air. Dougray Scott is a fitting antagonist with Danny Trejo, Frederick Koehler, and Robin Shou returning to round out the cast.

Death Race 3: Inferno lives up to its title and is a recommendable picture.