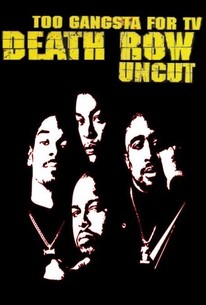 Between 1993 (with the release of Dr. Dre's The Chronic) and 1996 (when 2Pac dropped both All Eyez on Me and The Don Killuminati: The 7 Day Theory), Death Row Records was the most successful label in hip hop, releasing a string of major hits featuring a distinctively laid-back but funky sound that took gangsta rap to the top of the charts. Death Row Uncut collects videos of 28 tunes that Death Row released during their heyday, including "Dre Day" and "Let Me Ride" by Dr. Dre and Snoop Doggy Dogg, "Gin and Juice," "Who Am I (What's My Name)," and "Murder Was the Case" by Snoop Doggy Dogg, "Natural Born Killers" by Dr. Dre and Ice Cube, and "To Live and Die in L.A.," "Hit 'Em Up," and "Dear Mama" by 2Pac. Death Row Uncut features unreleased live performance clips and uncensored versions of some videos that were softened for broadcast; it also includes an interview with label CEO Suge Knight, who has few kind things to say about his former co-workers.

There are no critic reviews yet for Death Row Uncut. Keep checking Rotten Tomatoes for updates!

There are no featured reviews for Death Row Uncut at this time.