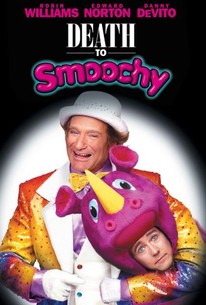 Critics Consensus: The talent involved can't save a script that has nowhere to go with its promising premise.

Critics Consensus: The talent involved can't save a script that has nowhere to go with its promising premise.

Critic Consensus: The talent involved can't save a script that has nowhere to go with its promising premise.

Randolph Smiley has it all--as star of the highest rated kid's show on TV, "Rainbow Randolph" has a penthouse, a Times Square billboard, cars, boats and all the indulgence that celebrity brings. Randolph also has an alcohol problem and a penchant for taking bribes from stage parents. These under-the-table transactions are quite lucrative until the Feds get wise. Busted and instantly reviled, Randolph is a star no more. Scandals don't play well to the under-8 demographic. Enter Sheldon Mopes and his alter ego "Smoochy," a puffy, fuscia rhinoceros. Eager to expand his audience beyond a Brooklyn methadone clinic, Smoochy--with his innocence and unrelenting ethics--is the perfect remedy for what ails the networks. Also, the kids love him! Sheldon soon learns, however, that children's television is a dangerous world, steeped in corruption, back stabbing and violence. Broke and homeless, Randolph doesn't share America's enthusiasm for his replacement--and thusly plots fierce revenge against Smoochy.

Nick Taylor
as Henry the Thug

Richard A. Cocchiaro Jr.
as Mitch the Thug

Matthew Arkin
as Save the Rhino Man

Fred Scialla
as Man in Crowd

Adam Bryant
as Man in Crowd #2

Richard Ziman
as Man in Crowd #3

Cara Wakelin
as Princess
View All

News & Interviews for Death to Smoochy

Get to Know the "Ratatouille" Voice Cast!
Jon Stewart to Host the Oscars!
Vincent Schiavelli Passes at 57

View All Death to Smoochy News

Critic Reviews for Death to Smoochy

A dark comedy that blows up like an exploding cigar, leaving nothing much behind but smoke, noise and a bad taste.

Death to Smoochy is often very funny, but what's even more remarkable is the integrity of DeVito's misanthropic vision.

I'm sure that some country, maybe France or something, will hail this as a work of genius, because it is so incredibly awful.

The result comes out loud, brash, vulgar, and considerably entertaining.

A blacker than black comedy.

This is a particularly toxic little bonbon, palatable to only a chosen and very jaundiced few.

I was happy enough with it through most of it, but are we living in such insecure times that even dark, violent comedies now have to end on an up note?

Considering that it's meant to be a comedy about a TV children's show, DeVitto's picture is particularly irritating, nasty, and mean-spirited.

[T]his is a movie that ought to have been a lot funnier... Death to Smoochy is a cry likely to be heard by ticketbuyers as well.

Robin Williams' manic energy is put to perfect use in this amusing and twisted comedy.

I giggled all the way through "Death to Smoochy." It wasn't that ha-ha giggle, it was that evil, kind of maniacal giggle.

Audience Reviews for Death to Smoochy

I loved the black comedy and how so many awful things happen with the involve of a children TV show. But Death to Smoochy have a bad script, what don't helÂ´p the movie. Rotten.

He's Big, He's Blue, He's Smoochy... and He's got to DIE! Good fun movie. It's entertaining and the story was smart and witty with lots of oddballs thrown around. Nice cast to go along with Williams and Norton who were very funny. Fired in disgrace, kids show host Randolph Smiley finds himself out on the street, while his replacement Sheldon Mopes, finds himself on the fast track to success with a new hit show as the proud purple rhino Smoochy. But things take a turn for the worst when Sheldon finds out that some of the people that he works with, and some he doesn't know he's working for, are all in it for the money. Meanwhile, Randolph is slowly turning insane with his only thoughts focusing on killing Smoochy and getting back to his life of luxury.

Ohh what a terrible movie. the whole concept is absolutely ludicrus and boring. I found Edward Norton extremly annoying in this movie that i couldnt finish this movie without getting absolutely irritated by this movie.

Death to Smoochy is one of the weirdest movies I have seen. I really enjoyed aspects of it and really hated others. Edward Norton was spot on, as usual, in the role of Smoochy; but the Robin Williams/Rainbow Randolph aspect was horrible. The movie was all over the place and in the end was just not as good as it could or should have been.