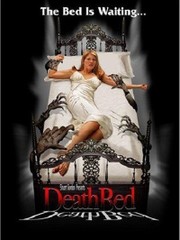 David T
½ June 5, 2014
A surprisingly effective psycho-sexual b-thriller, not without a slight amount of cheese, but coming from Full Moon Pictures, its expected, if not intended. Believable acting from Tanya Dempsey, and Joe Estevez in any role always makes me smile. A nice late-night time waster.

Carl M
February 1, 2013
A young couple moves into a chic new studio apartment with a dark past that comes back to haunt them after they bring an old antique bed down out of storage. Anyone that would willingly watch a movie called DEATHBED deserves all they have coming to them. Considering this came from the creators of PUPPET MASTER and THE GINGERDEAD MAN, one is immediately overcome with visions of a giant, toothy mattress munching on people, but instead, the film is played entirely straight as a pseudo-Slasher. Watching DEATHBED is like watching a really long, really boring porno where only the dude gets naked and everyone else leaves, unsatisfied. To say that the acting is stale or to complain about the listless directing is really giving the film more time than it deserves. As opposed to most other Full Moon Features that run around sixty-five minutes, DEATHBED clocks in at an astounding eighty minutes of pure garbage. For a film called DEATHBED, there is also a surprising lack of deaths that occur on or around the bed. It is a wonder that Stuart Gordon would allow his name to be attached to the film at all. Rated 'F' for Partial Nudity, Mild Violence, and False Expectations.

Robert I
January 22, 2013
We got this one mixed up with another film - "Death Bed - The Bed That Eats". This film is atrociously bad. But it did make me aware who Joe Estevez is.

Bill B
½ October 8, 2012
Possibly one of the worst films I've ever seen, taking place almost entirely in a single apartment where an old bed starts to drive the new lady of the house nuts.

Any movie where your female lead is driven to sexual frenzy and never shows any skin is the worst type of film-making you could possibly encounter, just because this turkey could have used some skin to break up the monotony.

Super Reviewer
Caesar M
January 8, 2012
How do I keep getting to these bizarre horror movies. I mean seriously, i've reviewed a killer Gingerbread Man, a killer tree, and killer who has nothing better to do but to kill teenagers at prom.

Like the usual horror movies I tend to review, it has a terrible story-line. It's about a killer bed that devours its users. I can't make it more interesting if I tried. These characters are poorly developed, the typical stupid sex craze teenagers in these movies, and finally the worst death scenes i've ever seen in a movie. There are also some unintentionally hilarious moments like when this old woman reading Oral Lesbian and the scene when these two guys just play poker and shoots the Death Bed instead of getting up leaving.

So how did Death Bed come to be, you won't care while watching this movie. Unfortunately when it does give you a explanation it's just bulls**t. Is there any redeeming value to this movie, no, not the even random nudity is even consider. There's also this one scene in the movie where a black woman, who name I can't remember, crawls for her life. I'm not kidding when I say it lasted for like 15 minutes, 15 minutes of nothing but seeing her crawl, and then getting eaten moments later.

I'm not done yet, usually i'll be done in four paragraphs, but no this time, I just hate this movie. The acting is horrible if you can even call it acting. There's actually a scene where a guy gets his hands melted off by the Death Bed and reacts like it was just a pinch. The killings are boring to watch and are repetitive. So how do these dumb-asses finally destroy the bed, by burning it. It literally took them an entire movie and like 10 people dying on that bed for these people to realize, lets burn it.

Deathbed is the worst, and I mean the worst horror movie I have ever seen. You'll literally almost died from boredom watching this movie. While it may have some hilarious moments, you have to sit through this un-watchable movie and it's just not worth watching this piece of s**t for a few seconds of enjoyments.

Adam W
½ November 21, 2011
Wow its been a while since Ive seen a film this cheap looking and bad. A pervy photographer who has a fetish for his girlfriend going on top and his girlfriend a prude start renting a flat which happens to be possessed by the worst ghost ever. A serial killer from the 1920s that strangled women on his bed with a necktie, ooooh thats one nasty ghost!
Sensing a dud on his hands the director steps up the tempo and in the last 10 minutes we see the girlfriend bludgeon her boyfriend to death with a hammer.
Too little, too late a big fat turd of a film.

Robert H
½ August 5, 2010
This is the kind of script that feels like it was written in order to see some naked actors or to have a good "casting couch" Full of lame on screen sex scenes, bad acting and lacking any logic you truly do need to check your brain at the door.
I get a sense that this film was geared directly at the teenage boy crowd as it does have a few moments of decent visual FX mixed in with all that "nudity".
And I use nudity lightly as there is potential for a lot more but for some reason, the filmmakers restrained themselves. Were they afraid of the ratings board? *shrug*
I'd avoid this one unless you're a purist who must see everything Full Moon /Charles Band /Stuart Gordon related.

Alexander C
May 30, 2010
This movie put me on my deathbed. The first half of the movie was totally pointless, and the last ten minutes made absolutely no sense to me, but by that part of the film I wasn't really paying attention.

Jeff B
April 28, 2010
A subpar horror movie that gets quite creepy at the end.

Jason D
August 28, 2009
Deathbed is the story of loving couple Karen and Jerry who find the perfect apartment that's been renovated from an old warehouse. We realize there's some sexual issues between the two until Karen unlocks a secret door that reveals a room with an old fashion brass bed. At this point, the viewer already knows that some murdering has been going on in there in the past, but our unknowing couple pull the bed out and make good use of it by engaging in a lot of highly sexual conduct before seeing ghosts and visions that start to drive the two mad. Can they escape the apartment before it destroys them both? Probably not, but by that point, you may be bored to tears. Those 80 long minutes sure couldn't go fast enough. First of all, someone saw talent in the filmmakers as the movie was presented by the great Stuart Gordon (From Beyond, Re-Animator, etc) and Charles Band (Puppetmaster movies, Demonic Toys movie, etc) and while I can see how this film draws inspiration from these two fellas, they should have kept their names from it, or at least given the filmmaker some helpful points to better this movie. There's strong sexual content throughout the film, but sadly, someone does a fabulous job of keeping everything hidden (amidst all of the sex) as there isn't a single tit, bush, or even asscrack until about the 56 minute mark where we get very brief titty shots from someone else. To add to that, the film is dreadfully boring as is the acting, save for Joe Estevez (Martin Sheen's brother) who livens things up a bit in all of his scenes. Overall, this film was kinda disappointing, despite picking up in the last 10 minutes.

Bryan G
½ July 22, 2009
Deathbed was the last film in the Stuart Gordon Collection that I had to watch. After enjoying both Castle Freak and The Pit and the Pendulum, I was looking forward to this film. I soon found out that this film wasn't made by Gordon, but rather he and Charles Band acted as producers to the film. One has to wonder how these two great minds got swindled into bringing us this unimaginative and un-scary horror flick.

The movie, if you can't tell by the title, is about a cursed bed. The intro to the film, which is done in a poorly replicated silent film-like style, sets up that this bed has a history of violence with footage of a woman being strangled to death on it. I found it odd that the bed pictured on the DVD cover looks nothing like the one in the film. And for a cursed bed, it doesn't look menacing. When I hear "cursed bed," I think of some sort of gothic design with some sort of large canopy on top. The bed in Deathbed looks more like something you'd find at a discount store, like Big Lots.

For the large part of the film, nothing much goes on. Our central characters, young couple Karen (Tanya Dempsey) and Jerry (Brave Matthews), aren't very fascinating people. And even when the cursed bed comes into play, things don't get any better or more interesting for them. Karen sees scary things, and her dreams are filled with horrific images. But none of it feels genuine, and most of it is unintentionally funny. Even toward the end of the film when Jerry becomes possessed, Deathbed never comes to life or becomes thrilling.

Deathbed is an ineffective horror film, with nothing to it that really works. The film has poor direction, the setting is boring, the soundtrack is generic sounding and the acting is lifeless. I've seen some bad films from Full Moon Entertainment, but Deathbed just may well be the worst I have seen from them.

Liam U
June 3, 2009
In a film named 'Deathbed' you can't really go in expecting too much. However, with atrocious acting this film is devoid of plot and atmosphere. The only highlight (which is not much of a compliment in a film this bad) is Joe Estevez - but apart from him this movie strives to be awkward and lacking any style or substance. Awful film.

Robert I
August 17, 2008
We got this one mixed up with another film - "Death Bed - The Bed That Eats". This film is atrociously bad. But it did make me aware who Joe Estevez is.