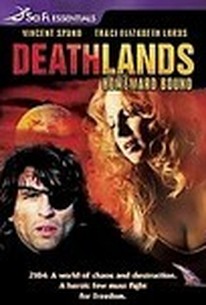 In 2084, a nuclear war wasted Earth, making the sky red of chemicals and the former United States of America becomes Deathlands. Breeds of mutants and half-mutants share what was left on Earth with humans. The vile of "Front Royale" is ruled by a good man, but he is killed by his wife Lady Rachel Cawdor, and his evil son Harvey Cawdor kills one of his brothers and blinds one eyes of his fifteen years old brother Ryan, who escapes. Twenty years later, the one-eyed leader Ryan Cawdor returns to "Front Royale" with his girlfriend and half-mutant Krysty Worth, his human friend and specialist in weapons JB Dix and the teenage mutant Jak Laurent to face his brother and his stepmother.

There are no critic reviews yet for Deathlands. Keep checking Rotten Tomatoes for updates!

There are no featured audience reviews yet. Click the link below to see what others say about Deathlands!