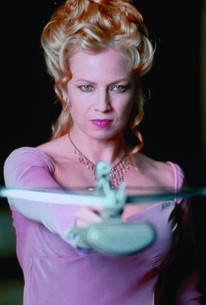 A feature-length pilot for a possible cable TV series, Deathlands: Homeward Bound was inspired by a series of novels and audio-books written by James Axler (actually a joint pseudonym, shared by several prominent science-fiction authors). Sort of a "Mad Max Meets the A-Team," the film is set in a post-apocalyptic future, where crime and destruction is the norm and law-and-order is in the hands of a few courageous mavericks. Vincent Spano stars as justice-fighter Ryan Cawdor, who travels the scorched countryside in his "SecWag," or military security wagon. Cawdor's hearty band of cohorts include his half-mutant girl, an angry Albino teenager, and a geeky weapons specialist called the Armorer. Not surprisingly, the original "Deathlands" book series was incredibly popular with long-distance truck drivers, presumably the audience to whom this ultra-macho thriller is geared. Deathlands: Homeward Bound debuted May 17, 2003, on the Sci-Fi Channel.

There are no critic reviews yet for Deathlands. Keep checking Rotten Tomatoes for updates!

There are no featured audience reviews yet. Click the link below to see what others say about Deathlands!