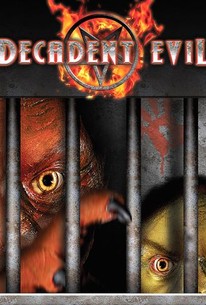 An evil vampire princess and her bloodsucking stripper sidekicks incur the wrath of a horny half human/half reptile hybrid and his evil spawn in genre stalwart Charles Band's sexy tale of terror. It's been a lifetime since Marvin and Morella were lovers, but Marvin has understandably held a hearty grudge against his old flame ever since she turned him into a Homunculous (lizard/human hybrid) after finding out that Marvin had been unfaithful. These days Morella (Debra Mayer) runs a strip club with the aid of her two fanged helpers Sugar and Spyce -- the trio subsisting on the blood of their unsuspecting male clientele. As Morella prepares for the kill that will transform her into the most powerful vampire the world has ever known, Marvin's three-foot-tall son Ivan (Phil Fondacaro) schemes to release his caged father so that he may finally extract revenge on the lusty bloodsucker.

It's a shame this is what became of the "Subspecies" series.

It's boring, it's dreary, it's derivative, and it's kind of a slap in the face to the horror hounds -- because the flick barely runs 65 minutes in length.

Dopey vampire flick offers no scares but a few intentional chuckles and one genuine surprise. Begins with a wholly unnecessary 4-minute backhistory of this particular vampire nest, although I guess they deserve some credit for trying to give their characters some footing, but what's with the little red homunculus dude named Marvin getting so much camera time? Knows not to overstay its welcome at a scant 67 minutes and doesn't take itself seriously, which are two reasons to prefer it over Twilight.