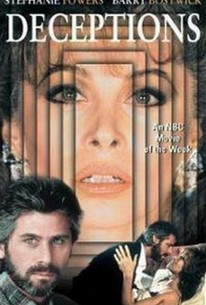 Stefanie Powers does double duty as twin sisters in the two-part TV movie Deceptions. Stefanie #1 is a glamorous globetrotter; Stefanie #2 is a drab New Jersey housewife. On a whim, the two siblings exchange identities, leading to a dizzying series of unexpected complications. Filmed on location in England and Italy, Deceptions is too thin to be stretched over two days (it was originally telecast May 27 and 28, 1985), but Stefanie Powers can make anything work. The film is based on a novel by Judith Michaels (the joint pen name for Judith Barnard and Michael Fain); it was adapted for television by Oscar-winning writer/director Melville Shavelson, who also shared directorial responsibilities with Robert Chenault.

There are no critic reviews yet for Deceptions. Keep checking Rotten Tomatoes for updates!

There are no featured reviews for Deceptions at this time.