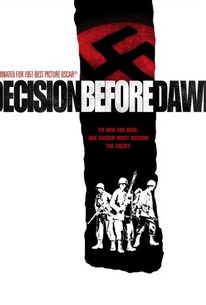 With the Third Reich disintegrating, several members of the German army are defecting to the Americans and offering their services as spies. US officer Gary Merrill trusts none of these last-minute "converts", but German prisoner Oskar Werner seems to be sincere. Werner insists that by helping the Americans, he is saving Germany from destruction. Merrill sends Werner behind enemy lines for counter-espionage with an American officer (Richard Basehart), who still isn't convinced that the German expatriate means what he says. At several critical junctures, it seems as though Werner had been lying about his mission, but at the last moment he saves Basehart's life at the cost of his own...but was this act of bravery intentional? A thoughtful World War II drama, Decision Before Dawn was filmed on location in Europe. Watch for a young and sickly-looking Klaus Kinski as an overeager defector.

Wolfgang Kuhnemann
as Clerk in Schleissheim

Maria Wimmer
as Woman in the Street

Critic Reviews for Decision Before Dawn

Movie-making at its best.

Werner, who served in the Axis forces during the war, gives a magnetic performance.

An outstanding production in all aspects.

It's most noted for being more sympathetic to peace loving German soldiers than are most American war films.

Litvak's intriguing account of U.S. Intelligence operation during the last year of WWII was nominated for the Best Picture Oscar, boasting a good performance from the young Oskar Werner as a sensitive and naive German soldier-traitor.

The film manages to be suitably hard on the Nazi regime while providing one of the first sympathetic treatments of the German people.

Audience Reviews for Decision Before Dawn

I would thought that the appetite for these types of films would have waned once the war ended but here we have another mainly propaganda type film that is mildly entertaining if not deep. Perhaps this was to rally the troops to get ready for Korea.

WWII drama about a group of German P.O.W.'s who were persuaded to spy for the allied war effort. Part docu-drama, part Hollywood propaganda. Entertaining but less than substantial.

A World War 2 spy movie that was nominated for Best Picture and forgotten immediately thereafter, and for mostly good reasons. In the name of full disclosure I'll admit that I was mostly distracted by other things when I was watching this. Similar to Rio Grande, I found that this had a very long build up and by the time they got to their actual mission I had sort of lost interest and started screwing around on my laptop while watching it.