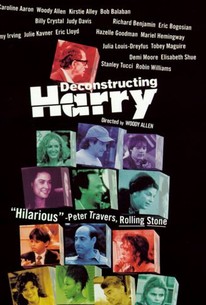 Woody Allen wrote and directed this comedy about turmoil in the erotic and creative life of immature New York writer Harry Block (Allen), who calls himself "spiritually bankrupt." Harry has gone through numerous lovers, three wives, and a half-dozen psychiatrists (including one he married). With a plot structure inspired by Ingmar Bergman's Wild Strawberries, Harry must travel to upstate Adair College to receive an award, but he can't find anyone to accompany him. Recent girlfriend Fay (Elisabeth Shue) has decided to marry his best friend Larry (Billy Crystal). Harry asks her to reconsider, drop Larry and come back to him. His friend Richard (Bob Balaban) can't commit to the trip because of heart problems. Harry wants his small son Hilly (Eric Lloyd) to see him honored at Adair, but Hilly's mother Joan (Kirstie Alley) steps in to prevent this from happening. Former sister-in-law Lucy (Judy Davis), angry after finding their secret relationship detailed in one of his novels, arrives at Harry's apartment carrying a weapon. Throughout, scenes from Harry's novels and short stories (inspired from Harry's real-life situations) are intercut: In a scene from one book, Ken (Richard Benjamin) fools around in the kitchen with his sister-in-law Leslie (Julia Louis-Dreyfuss). In another book scene, Paul Epstein (Stanley Tucci) marries his psychiatrist Helen (Demi Moore). Other scenes come from his short stories, including movie actor Mel (Robin Williams). With turndowns from all his friends, Harry eventually heads for the college with black prostitute Cookie (Hazelle Goodman) and Richard. Allen described the script before he began shooting: "I'm going right into the teeth of it. It's about a nasty, shallow, superficial, sexually obsessed guy. I'm sure everybody will think-I know this going in-they'll think it's me." The title suggests a reference to Deconstructing Sarah, a 1994 British thriller. Jazz standards punctuate the soundtrack. Working title: The Worst Man in the World. Shown at the 1997 Venice Film Festival.

Jennifer Garner
as Woman in Elevator

Certain echoes from Allen's own tabloid ferment get channeled through bombastic speakers here.

Deconstructing Harry is abrasive, complex, lacerating and self-revelatory. It's also very funny, most of the time.

No single Woody Allen film ever sums up everything, or could, and what is fascinating is to watch him, year after year, making the most personal of films, and hiding himself in plain view.

A reminder of a time when Woody Allen made films that were forces of energy, bundles of fun, and bubbling with ideas, ingenuity and a real surplus of humour.

Too bad it is difficult to really care about what is going on since such a thoroughly unpleasant character is at the center.

A slightly unpleasant and shocking film.

By turns clever, devestating, bitter and delightful, this challenging piece of work is easily one of Allen's most mature efforts to date.

The film is worth seeing only for Woody's acerbic one-liners.

One of the director's darkest, the funny Deconstructing Harry has an incredible script (by Woody Allen, of course) and, as it's customary with his films (and more so with his comedies), an incredible cast. Allen, Hazelle Goodman, Caroline Aaron, Judy Davis and Eric Lloyd stand out in an ensemble that also features Stanley Tucci, Demi Moore, Tobey Maguire, Julia Louis-Dreyfus, Billy Crystal and Kirstie Alley.

Harry Block has written a best seller... bout his best friends... he revealed their deepest secrets... and they're not pleased... now Harry Block is going to Hell...

The poorly balanced pedantry and disjointedness of this Woody Allen work can be pretty annoying; but some funny bits can compensate that.

Woody's blend of nihilist, fatalistic, atheistic philosophies is my life.