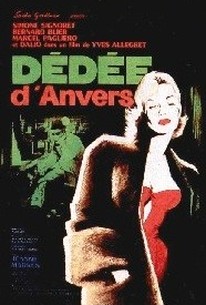 Originally released in France as Dedee D'Anvers in 1948, this tight little melodrama was both directed and co-written by Yves Allegret. The title character, played by Simone Signoret, lives in near-squalor near the docks of Anvers. Her only companions are practitioners in that left-handed form of endeavor known as petty crime. Even the man she lives with, doorman Marco (Marcel Dalio), is not immune to baser instincts: Marco is driven to murder when sea captain Francesco (Marcel Pagliero) threatens to take Dedee away from him. For his troubles, Marco is himself knocked off by Dedee and seedy café-owner Rene (Bernard Blier). And so it goes. Suspense is deliberately downplayed in Dedee in favor of characterization and mood. ~ Hal Erickson, Rovi

There are no critic reviews yet for Dédée d'Anvers (Woman of Antwerp). Keep checking Rotten Tomatoes for updates!

There are no featured reviews for Dédée d'Anvers (Woman of Antwerp) at this time.