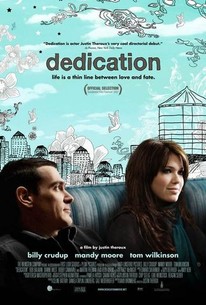 Critics Consensus: Mandy Moore and Billy Crudup's lack of chemistry in Dedication makes it hard to maintain interest in this confused love story.

Critics Consensus: Mandy Moore and Billy Crudup's lack of chemistry in Dedication makes it hard to maintain interest in this confused love story.

Critic Consensus: Mandy Moore and Billy Crudup's lack of chemistry in Dedication makes it hard to maintain interest in this confused love story.

Actor Justin Theroux (Charlie's Angels: Full Throttle, Mulholland Dr.) steps behind the camera for his directorial debut with this irreverent romantic comedy. Billy Crudup is Henry, a cynical children's book writer who holds little more than disdain for his pint-sized target audience. Artist Rudy (Tom Wilkinson) is both Henry's illustrator and the only friend in his miserable life. But when Rudy's health fails, Henry unwittingly finds himself paired with a new illustrator, played by Mandy Moore, who proves to be the oil to his water. Dedication also stars Mia Farrow and Bob Balaban.

Chris Fitzgerald
as Robin
View All

Tropic Thunder Cruise-ing for a Cameo?
Sundance Reviews: Short and Sweet, A Review Roundup
Sundance News: "Son of Rambow" Is Fest’s Biggest Sale; "How She Move," "The Signal," Others Also Acquired

It leaves you wishing the oddball couple well.

[Director Theroux] has a tendency to overplay things, with self-consciously arty direction and an intrusive soundtrack.

Directed by actor Justin Theroux with a surprisingly saccharine hand, the film is neither believable nor novel.

Billy Crudup and Mandy Moore are immensely likable. We like them so much we regret having to see them in this story.

Theroux brings none of the electric surprise or intensity of his acting to bear on the movie. He seems unhappy with the assignment.

Dedication's problem isn't its idealized conception of love but the thoroughly unconvincing way in which it is realized.

That's what it takes to make it through this self-consciously dark romantic comedy.

Theroux shoots and edits creatively, and elicits good performances, so here's hoping he gets another crack behind the camera with a more cohesive and consistent script.

Dedication is a loopy, semi-romantic comedy better served had it been made by Hal Hartley and released during the autumn of 1994.

Will help Moore get additional notice within the industry, from writers, directors and other creative types who pay attention.

Good rom-com. Not convincing enough for me to give it a higher rating but at least there were no regrets after watching it.

I really enjoy Justin Theroux's "Dedication", it's an affecting film with an oddball romance in the middle. While the film is certainly stylish, it is also deeply human. Billy Crudup and Mandy Moore are wonderful here, inhabiting complicated characters with ease. Tom Wilkinson is just as great and his scenes with Crudup are standouts. Accompanied by a soundtrack that supports the narrative as much as the performances and dialogue do, "Dedication" is a "indie" film that never seems pretentious and has real, contagious emotion.

Crudup is nutty, disturbed, and endearing as Henry Roth. There's something I can't pinpoint about Mandy Moore's performance. I wouldn't say she was phoning it in, not even that; it's as if she was texting, faxing, and bluetoothing it in. Trying so hard but nothing coming out. In the end, I have to say it's Henry's story. Lucy had no personality at all and because she had no likable or unlikable qualities, the arc of the romance went too fast.

This was a surprise. I bought this film expecting an average love story with clichéd scenarios and cheesy dialogue. Well, it turns out I loved this film a lot and I can't believe I'm saying this, Mandy Moore was great in this. I'm kinda partial with singers turning into actors so I'm not really a fan of the thing but Mandy Moore in this film is an exception. She was great, I love her. She's not like those other singer-turned-actors who has only one expression in their face and it never changes throughout the film. Like Norah Jones in 'Blueberry Nights' and all those rappers in gangster films. She was pretty good here. Her leading man is Billy Crudup. I can describe him in one word: Phenomenal. He plays Henry Roth (50 First Dates homage?) a neurotic, eccentric, crazy, wacky children's books author who dislikes driving a car and likes to get his chest splotched by a stack of books. He reminds me of Woody Allen's character in "Annie Hall" They are very much similar. They're both neurotic, they both look like they'll break down in a jiffy and they both dislike driving. Fantastic. This is the director's excellent directorial debut. The dialogue was great it contains some very memorable lines, the chemistry between Mandy Moore and Billy Crudup sticks with you like super glue, the acting is superb (Tom Wilkinson huzzah) and the cinematography is better than awesome. The editing: magnifique. "Dedication" is a 4.5/5