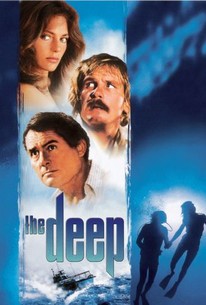 Peter Benchley, who wrote Jaws, also wrote The Deep. Scuba divers David Sanders and Gail Berke (Nick Nolte and Jacqueline Bisset), assisted by Romer Treece (Robert Shaw), discover a sunken treasure off the Bermuda coast. They also find a stash of narcotics. David and Gail spend the rest of the picture avoiding bad guys who stashed the drugs and want the treasure as well.

News & Interviews for The Deep

View All The Deep News

Critic Reviews for The Deep

Get past the Jaws connections and The Deep is a good, but not great, underwater adventure with fleeting moments of excitement to keep you invested

Indeed, the underwater sequences are some of the best I've seen and easily the highlight of what is an entertaining action film.

In the end, like too many other recent thrillers, it is a triumph of matter over mind, but at least it holds your interest while you are watching it.

What you will come up with is good, solid, suspenseful entertainment that the whole family can go to, and you really have to search Deep to find that today.

The Deep is an interesting action movie that manages to keep us at the edge of our seats for an hour and a half. [Full Review in Spanish]

The only thing deep about this thriller is the big budget.

This trashy underwater thriller, based on Benchley (Jaws) best-seller, was one of the year's most popular films, despite negative reviews.

a memorable ride back to the shaggy '70s, and more than a little harrowing one.

The Deep doesn't exactly give you the bends, but when you come up for air you realize that this was one cinematic dive that could have been deeper . . . and better edited.

A sleek and empty vessel, inspired not by Jaws but by the boxoffice for Jaws.

Audience Reviews for The Deep

Peter Benchley made a name for himself by writing Jaws. He continued the trend by writing The Deep. Then, he decided to step in and adapt that book for this cinematic adaptation. The story follows a young couple on a romantic vacation in the Caribbean who stumble uon a sunken ship while scuba diving that could lead to untold riches...and immense danger. The set up is rather typical for action/adventure/treasure hunt thrillers, but even then, it's pretty enjoyable. That last sentence mostly refers to the book. The movie on the other hand, is a dull mediocre disappointment, I'm not sure why either. Maybe Benchley just didn't care. It's obvious that he probably wasn't going to have this top Jaws, but still, he could have done a lot better. The main thing is that the movie strips away a large amount of character development, condenses the story greatly, yet still has a run time of a little over 2 hours. The performances are okay, and there's a nice cast, including Robert Shaw, Eli Wallach, Nick Nolte, Jacqueline Bisset, and Louis Gossett Jr. but I really had a hard time buying Nolte in the lead, and he doesn't have much chemistry with Bisset. She looks great in a tight, wet , white bikini, though. The film's pacing just seemed really off, and it would probably seem disorienting to those not familiar with the book, and those who've read it, like me, will just be mad at the sloppy adaptation. To the film's credit, some of the music is okay, and the cinematography is really good, and I did like the underwater sequences, but overall, this movie was kinda blah, and the cheesy ending was way too silly, so much so that I was almost considering hating on this even more. I don't really recommend this, but if you want a treasure hunt movie, and don't mind if it's kinda bad, then sure, give this one a watch on a rainy day.

Thriller based on Jaws author Peter Benchley's novel of the same name, The Deep is a good film, but is never anything great. This film takes elements of Jaws and creates something new. If you see the film, you'll understand why. The film is a good adventure that had the potential of being something better. Writer Peter Benchley has written one great novel, Jaws over the course of his writing career, and he would always plagiarize his classic work to some extent. I've never read his book, The Deep, but with what I've seen here, you can clearly see that there are parts that echoes several scenes from Jaws, the book and the film. I think the idea of having the plot of the couple on a romantic couple looking for sunken treasure was good, but also they could have cut out the part of the killer fish. I felt that it was too close to Jaws, and it ruined the film for me a bit. The cast do a great job though, and actor Louis Gossett Jr. delivers here, unlike future film roles such as Iron Eagle. The Deep is a mindless adventure film that could have been better. But considering that Benchley's story returns in some way to Jaws, it's no surprise that this film isn't great either because it lacks originality as well. I'm not saying that this is a bad film, on the contrary, it's a good entertaining film, but I felt it could have been much better, and that Benchley could have written the book without putting references to Jaws. This is still worth watching for a two hour mindless entertaining night of film. The cast however save this film from being a dud as well as Peter Yates effective directing.

Is anything worth the terror of The Deep?

"The Deep" was made a few years before I was born, but I had always heard it was a good movie. I finally watched it and I liked it....a lot. From what I heard, I was just expecting it to be full of great underwater photography, but it has an amazing plot tagged alongside it. Nick Nolte and Jacqueline Bissett are a couple that are on vacation in Bermuda. They go deep sea diving one day and find a small bottle of morphine from a ship that sank in the 1800's. They go to a man who's a known treasure hunter (Robert Shaw) and he tells them what they found. But they are also pestered by Louis Gossett, who is a serious collector that will do anything to get his hands on one of those tiny bottles of morphine. Robert Shaw teams up with Nolte and Bisset after they decide there might be more bottles of the treasured substance and possibly some treasure deep in the sunken ship. All the while, they must stay away from Gosset and his fearsome gang. There are also more exciting sequences such as an encounter with a deadly eel and of course, the wet t-shirt swim at the beginning. "The Deep" is one of the most exciting and suspenseful adventure movies ever made. Yes, it does have great underwater scenery (mostly at the beginning) and the background music goes perfect with the movie. Although the wet t-shirt by Jacqueline Bisset might be what's best known about the movie, this is actually a great movie. It's one of my favorites. As for the DVD, it's not big at all on extras. You do get to select from subtitles in several different languages, there's a scene selection, and best of all, both the widescreen and full screen versions are included in this DVD's one disc. Unfortunately, the sound quality isn't very good. While your current volume setting might be too loud or just right on one of your DVDs, it will probably be too low for "The Deep". The picture quality is good enough though. If you're a fan of the movie, "The Deep", I do recommend adding the DVD to your growing collection. NOTE: That was my Amazon review from the year 2000. Yeah, the wet t-shirt by Bisset, very nice indeed. But I love the adventure, scenery, and suspense of this film even more. Very underrated movie and a favorite of mine.