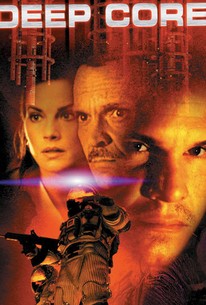 Ego-driven industrialist Alan Morrisey (Harry VanGorkum) has paid to develop the ultimate mining machine -- a nearly invincible vehicle that uses laser energy to burrow through anything. But the machine's creator, Brian Goodman (Craig Sheffer), knows that it is too good at what it does and could cause repercussions beneath the Earth's core. So he destroys it. Years later, Morrisey has hired another scientist, Allison Saunders (Terry Farrell), to rebuild the machine, and Goodman's predictions of devastation come true. There are earthquakes, tsunamis, and volcano eruptions around the world, and they're only getting worse. It's up to Goodman and his crack team of subterranean disaster fighters -- Sam Dalton (Bruce McGill) and Rodney Bedecker (Wil Wheaton) -- to save the planet by setting off a series of subterranean nuclear explosions, with Morrisey and Saunders along for the ride. Meanwhile, topside, the sinister Daryl Simmons (James Russo) is planning to sabotage the rescue in order to help the Chinese military.

Dean Biasucci
as Man in Black

Dane Northcutt
as Technician
View All

There are no critic reviews yet for Deep Core. Keep checking Rotten Tomatoes for updates!

There are no featured audience reviews yet. Click the link below to see what others say about Deep Core!