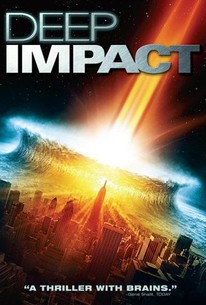 Critics Consensus: A tidal wave of melodrama sinks Deep Impact's chance at being the memorable disaster flick it aspires to be.

Critics Consensus: A tidal wave of melodrama sinks Deep Impact's chance at being the memorable disaster flick it aspires to be.

Critic Consensus: A tidal wave of melodrama sinks Deep Impact's chance at being the memorable disaster flick it aspires to be.

Mimi Leder (The Peacemaker) directed this science-fiction disaster drama about the possible extinction of human life after a comet is discovered headed toward Earth with the collision only one year away. Ambitious MSNBC reporter Jenny Lerner (Tea Leoni) stumbles onto the story, prompting a White House press conference. United States President Beck (Morgan Freeman) announces the government's solution: a team of astronauts will travel to the comet and destroy it. The team leader aboard the spaceship Messiah is Spurgeon Tanner (Robert Duvall), who was once the last man to walk on the moon. However, the mission fails, splitting off a chunk of the comet, now due to land in the Atlantic with the impact sending a 350-foot tidal wave flooding 650 miles inland, destroying New York and other cities. The larger part of the comet, hitting in Canada, will trigger an E.L.E. (Extinction Level Event), not unlike a "nuclear winter" as dust clouds block out the sun and bring life to an end. President Beck reveals Plan B: a cavernous underground retreat constructed to hold one million Americans, with most to be selected through a national lottery. Since teenage amateur astronomer Leo Biederman (Elijah Wood) discovered the comet, his family gets a pass to enter the cave, but his girlfriend Sarah (Leelee Sobieski) and her parents will be left behind. Meanwhile, still in space, Spurgeon Tanner devises a plan for a kamikaze-styled operation that could possibly save the Earth. Special visual effects by Scott Farrar and Industrial Light & Magic. ~ Bhob Stewart, Rovi

Charles Dumas
as Jeff Worth

It drags considerably, and mainstream action audiences are likely to find it tedious and undeniably old-fashioned.

The filmmakers want us to care about all these people, but we never really get to know them, and there is no sense of impending doom except when Leoni starts chugging martinis.

Deep Impact isn't especially deep, and the extent of its impact seems limited. But it does turn out to be a fairly involving movie.

When all is said and done, it is precisely such lackluster imitations of real life that prevent this lightweight melodrama from leaving any deep, or lasting, impact of its own.

These folks are so blase, you'd think that scientists had predicted pennies from Heaven instead of world's end within the year.

Even Leder's solid dramatic credentials can't save what is essentially a rotten script.

Whereas most disaster movies wind a ticking clock and ride the tension of life or death, Leder dares to grapple with fatalism, and study how we react when all of the world's problems can't be solved with a giant bomb.

The final 30 minutes - where all of mankind starts looking for anywhere to duck and cover - is great disaster movie stuff.

Deep Impact has all the makings of a cinematic masterpiece but falls just a tad bit short of joining the all-time classics.

A generic, paint by the number, disaster flick with so-so special effects at the climatic payoff.

There are some impressive disaster effects in the final hour, and thanks to some clever and knowing twists, Deep Impact keeps you averagely entertained right up until the cataclysmic tidal-wave finale.

A great action/disaster film. It has a good cast, decent Sfx which still hold up today. I like the different perspectives of the characters in the film. The type of film you can watch over and over again.

When a movie like this wants to be a drama about characters instead of "just" brainless catastrophe (catastrophe that takes place only in the end anyway), the least they could do is to come up with characters that matter and a plot that isn't so offensively stupid and incoherent.

I'll never forget when the topic of conversation was "Which do you like better? Deep Impact or Armageddon?" Seems like "Armageddon" won....I'll take both, but between the two, I always preferred "Deep Impact."