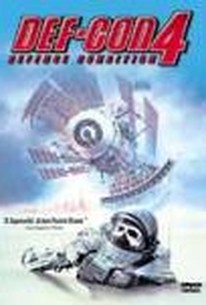 Shot in 1983 but not released until 1985, this low-budget sci-fi adventure is set in a degenerate society sometime in the near future, with humans thrown back to the level of Neanderthals by nuclear war. Three astronauts, two men and a woman, are in charge of a space station armed with nuclear weapons when World War III erupts on earth. They remain in space to stay out of the conflagration but are forced to crash-land several months after the war has wiped out most of civilization. After the crash, one astronaut is killed, another is captured, and the third stays with the downed space station in a series of chase-and-capture scenes. Marauders have taken over a lawless world and the future looks bleak for everyone, even the remaining astronauts. ~ Eleanor Mannikka, Rovi

Ken Ryan
as Newscaster
View All

There are no critic reviews yet for Def-Con 4. Keep checking Rotten Tomatoes for updates!

There are no featured audience reviews yet. Click the link below to see what others say about Def-Con 4!