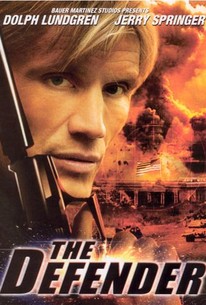 Rocky IV villain and B-movie leading-man Dolph Lundgren takes his first stab behind the camera with this 2004 action flick. Lundgren is Lace Rockford, an expert security agent heading up a team tasked with protecting the United States' National Security Advisor. When the most diabolic terrorist leader in the world kidnaps the NSA head, it's up to Rockford and company to get her back before it's too late. The Defender also stars talk-show host Jerry Springer as the President of the United States.

Geoffrey Burton
as Jamal
View All

Critic Reviews for The Defender

There are no critic reviews yet for The Defender. Keep checking Rotten Tomatoes for updates!

Audience Reviews for The Defender

More Dolph action and this time, amazingly!, its a good 'Die Hard' mixed with 'Aliens' type film. A special forces team led by Dolph are double crossed whilst protecting a secret meeting by mercs hell bent on ending thus said meeting. The resulting action is actually really good as Dolph's team is killed off one by one as they try to fend off the baddie mercs and get the secret meeting members to safety. A lot of decent gun fighting, government conspiracies, a few twists and some reasonable acting make this pretty good. Simply replace the baddie mercs with aliens and you would have 'Aliens' whilst the whole thing could be 'Die Hard' in a hotel...almost hehe. Worth a look if you;re a firm Dolph fanatic for sure.

A solid directional debut by Dolph Lundgren, he keeps his action hero status in tact with a stylsih and effective attack in directing. A slick, stylish, cool and pulse-pounding action-packed thriller. A smart, excitng, fast-moving and thrilling film. It's packed with lots of great explosive action and gripping suspense. It surprisingly keeps you on the edge of your seat till the end. Even thow there is a lack of character development, the actors behaviour and attitude toward eachother is compelling and enjoyable.