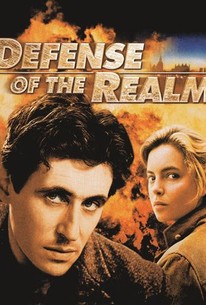 This fast-paced thriller examines the amorality of a nation's secret services and the responsibility of journalistic investigations in an era of nuclear tensions and bureaucratic deceit. The film examines an unspooling series of events occurring after a near crash of a nuclear bomber at an American Air Force base in the English countryside. When Dennis Markham (Ian Bannen), a well-respected member of Parliament, is reported by a London paper to have been seen leaving a woman's home, and the woman is found to also be familiar with a dignitary from East Germany, his loyalty to his country is questioned, and he is forced to resign. The author of the newspaper exposé, Nick Mullen (Gabriel Byrne), continues his investigation with his colleague Vernon Bayliss (Denholm Elliott). But when Vernon dies from a mysterious heart attack, Mullen suspects something deeper at work and finds evidence of a complex web of deceit concerning a secret Air Force base. With the help of Vernon's secretary, Nina Beckman (Greta Scacchi), Nick fights the dark forces in order to bring the truth to light.

The acting is strong throughout, but Elliott is especially effective. What is it about this actor, who has been in so many different kinds of movies and seems to make each role special?

There are marvelous performances by several British character actors, especially Denholm Elliott and Ian Bannen, and feelings of nerve-racking paranoia are evoked as a reporter, played by Gabriel Byrne, uncovers unexpected motives while investigating a Ca

There are no featured audience reviews yet. Click the link below to see what others say about Defence of the Realm (Defense of the Realm)!