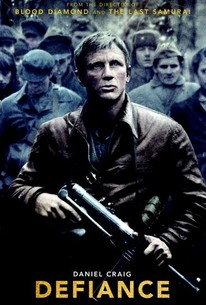 Critics Consensus: Professionally made but artistically uninspired, Ed Zwick's story of Jews surviving WWII in the Belarus forest lacks the emotional punch of the actual history.

Critics Consensus: Professionally made but artistically uninspired, Ed Zwick's story of Jews surviving WWII in the Belarus forest lacks the emotional punch of the actual history.

Critic Consensus: Professionally made but artistically uninspired, Ed Zwick's story of Jews surviving WWII in the Belarus forest lacks the emotional punch of the actual history.

Based on an extraordinary true story, "Defiance" is an epic tale of family, honor, vengeance and salvation in World War II. The year is 1941 and the Jews of Eastern Europe are being massacred by the thousands. Managing to escape certain death, three brothers take refuge in the dense surrounding woods they have known since childhood. There they begin their desperate battle against the Nazis. The brothers turn a primitive struggle to survive into something far more consequential--a way to avenge the deaths of their loved ones by saving thousands of others. At first, it is all they can do to stay alive. But, gradually, as whispers of their daring spreads, they begin to attract others--men and women, young and old--willing to risk everything for the sake of even a moment's freedom. Tuvia is a reluctant leader and his decisions are challenged by his brother, Zus who worries that Tuvia's idealistic plans will doom them all. Asael is the youngest--caught between his brothers' fierce rivalry. As a brutal winter descends, they work to create a community, and to keep faith alive when all humanity appears to be lost.

Jodhi May
as Tamara Skidelsky

Schreiber and Craig make a well-matched pair of bulls. Schreiber's volatility is a nice foil to the taciturn intelligence that makes Craig such a great Bond.

Zwick's limitations as an action director seem linked to a troubled conscience: he seems conscious of a need to entertain, but worried that his audience will take too much pleasure in the spectacle of vengeance.

I felt like these characters were prototypes and not people.

As a piece of historical redress, a great service has been done in bringing this narrative to the screen.

It's understandable and laudable that they desire not to sensationalize the Bielskis, and they've made a worthy film. But their understated approach makes the struggle seem less urgent than it must surely have been.

Every minute that the cast and crew shot Defiance on location in Lithuania was worth it.

Defiance survives its sometimes pedestrian tone and personality due to a serious and honest attitude towards its principal subject matter.

The script can't quite manage enough pathos for its band of oddly anti-heroic protagonists to create a lasting impression.

As the leader with a checkered past, Craig shows off both his action hero chops, his sensitive side and a nifty little Belorussian accent that occasionally wavers.

I recommend the movie as a redemptive and uplifting tale of heroism... if only to call attention to the real heroism of the historic Bielski brothers.

If only Defiance could offer up a treatment of this historical phenomenon with more originality and mettle and less faith in war-movie razzle-dazzle.

Defiance is the true story of Jewish brothers Daniel Craig and Liev Schreiber who hid from the Nazis in the Belarussian forest and quickly found themselves with an entire community of fleeing refugees to protect. Edward Zwick has always been fond of telling stories about the triumph of the human spirit and has on occasion been guilty of over-egging the sentimental side of things to get his intended point across. Defiance is no exception, but thanks to some clever writing and a strong central performance by Daniel Craig, this film manages to pull itself back from the brink of schmaltz. When Craig mounted a white steed and gave a very Braveheart speech to his new subjects, I thought "Oh great...here we go again...", but soonafter when the people begin to starve, he promptly pulls out a Luger and puts a bullet in its head, almost as if to say "there's a time and a place for pomp and bluster, but this isn't it"! He shows the conflict between animal instinct and humanity quite nicely, sometimes showing compassion and yes, speech making, but at others dealing with the issues at hand with a ruthless efficiency. Craig and some handsome photography made this film for me and although it is guilty of emotional button pushing, sometimes those are the buttons you want to be pushed; especially when it comes to seeing at least one small victory against the greatest shower of evil bastards ever to walk the Earth...

I wanted to love this movie. The plot, the actors, the setting, all seemed to be the perfect setup for a gripping and dramatic film. Edward Zwick directed this movie and he tends to take sensitive topics and throw in blockbuster action scenes. It almost gave the movie an artificial feeling. Not only that, the follow-up to the ending was dreadfully simplistic with very weak character development. There is one scene noteworthy that really brings out Daniel Craig and Liev Schreiber's acting performance, other than that, this movie lacks.

If you were trying to find a way to bash this film you could say that it is about people running and hiding through the same kind of forest for two hours. That would not do the film any justice, of course, even if it is visually somewhat repetitive. The true story of three Belorussian brothers who take it into their own hands to safe as many Jews from the Nazi occupation as possible, by hiding in the woods. Especially the relationship between the reasonable leader Daniel Craig and hot-tempered Liev Schreiber makes the movie interesting even through a couple of slow passages. It also raises interesting questions about the nature of resistance and revenge in its different aspects. The action-packed showdown is really exciting, because those characters have grown on you by then. An enthralling and very entertaining unknown chapter of WW2 history.

Despite a great and inspiring story, and wonderful actors and director, it's hard to think that Defiance wouldn't be great, but the reality is not quite so positive. The cinematography is extremely gorgeous: shot on location in Lithuania. The actors do a good job (except for Daniel Craig who can't seen to keep his accent), and James Newton Howard provides an intense, powerful score that should have won the Best Soundtrack Oscar, but the screenplay is cliched, and the film doesn't have any depth or emotional gravity to be powerful and involving.