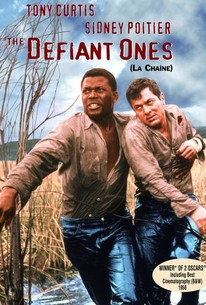 Critics Consensus: An advocacy drama that makes its points without belaboring them, The Defiant Ones relies on its clever concept and brilliant performances to repudiate racial prejudice.

Critics Consensus: An advocacy drama that makes its points without belaboring them, The Defiant Ones relies on its clever concept and brilliant performances to repudiate racial prejudice.

Critic Consensus: An advocacy drama that makes its points without belaboring them, The Defiant Ones relies on its clever concept and brilliant performances to repudiate racial prejudice.

The Defiant Ones Videos

The Defiant Ones Photos

Convicts Tony Curtis and Sidney Poitier escape from a chain gang. Curtis' character, John "Joker" Jackson, hates blacks, while Poitier's character, Noah Cullen, hates whites. However, the men are manacled together, forced to rely on each other to survive. Captured at one point by a lynch-happy mob, the convicts are rescued by Big Sam (Lon Chaney Jr.), himself a former convict. The men are later sheltered by a lonely, love-hungry widow played by Cara Williams, who offers to turn in Cullen if Joker will stay with her. By the time the two men are within hailing distance of a train that might take them to freedom, they have become friends. The script for The Defiant Ones is credited to Harold Jacob Smith and Nathan E. Douglas. The latter was really Nedrick Young, a blacklisted writer, whom producer Stanley Kramer hired knowing full well that Young was using an alias (when "Douglas"' credit appears onscreen, it is superimposed over a close-up of a truck driver -- played by Nedrick Young). Both the script and the photography by Sam Leavitt won Academy Awards. If you look closely, you'll notice that the actor playing Angus is former Little Rascal Carl "Alfalfa" Switzer, making his last screen appearance. The Defiant Ones was remade for TV in 1986, with Robert Urich and Carl Weathers in the leads.

Cara Williams
as The Woman

Kevin Coughlin
as The Kid

News & Interviews for The Defiant Ones

View All The Defiant Ones News

Critic Reviews for The Defiant Ones

Its message is absorbingly wrapped however, in elements of acute suspense and blood raw action that should excite even those who deplore the integration of sobering thought and fiction in their movie entertainment.

The Defiant Ones is a film no one with mind or heart is likely to forget in a long, long time.

This Stanley Kramer messageathon plays better as a high-concept thriller than a statement about race relations or the human condition.

Credit goes to producer, director and writers for a picture which combines a strong social document with about as much excitement and suspense as you could ask for.

Stanley Kramer, who has been responsible for some of Hollywood's greater motion pictures, has a little masterpiece in The Defiant Ones.

Stanley Kramer, his superb stars, featured players and the rest have put on record a powerful, tender definition of brotherhood.

Kramer gets a message he felt America needed to hear and probably still needs to hear on the screen in an artful, just-edgy-enough and still-entertaining film that retains its claim as a "classic"

The Defiant Ones is a great one all the way. It's a throbbing photoplay made by a man with a conscience.

Both Curtis and Poitier turned in superb performances.

Curtis and Poitier, carrying most of the acting load, both do well, and in addition, there are some very real minor characters. It's a film with something to say, but apart from a few moments which tend to be talky, it says it with absorbing action.

This is the point made by The Defiant Ones: not an attack on colour prejudice in terms of morality, but of plain necessity.

It is a picture to be put on everyone's "must" list.

Audience Reviews for The Defiant Ones

A morality tale w/o a lot a finesse, this late 50's era story literally chains together two opposing views and lets them play out against each other while on the run from "The Man". The saving grace is the performance of the leads who lend some small humanity and believability to the rote and didactic "educational" format, which often lacks even continuity. Still, a historical American experience on film.

Everyone should have a life-changing event like this. Consider a pre-civil rights era when blacks and whites were supposed to hate each other. This pair are shackled to each other for days and have no choice but to depend on each other for either one of you to survive. It is worth seeing.

Whilst I cringe my way through the prejudice of history, beneath their lies a film of opportunity and comradery. I couldn't help being reminded through the film of later films that perhapsmay have been influenced by this film; The Fugitive and O'Brother where art thou? A worthy classic.

The Defiant Ones Quotes