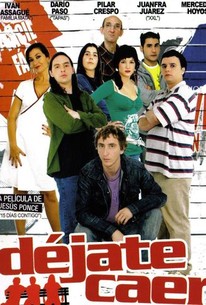 Three guys who've devoted their lives to doing nothing discover it's not as easy as it used to be in this independent comedy from Spain. Grabi (Ivan Massague), Nandi (Dario Paso) and Roberto Carlos (Juanfra Juarez) are three thirty-something layabouts who still live with their parents, avoid gainful employment and devote their days to drinking beer and sharing whatever thoughts they have with one another. Robert Carlos is engaged in a lackadaisical romance with shop manager Mercedes (Mercedes Hoyos) until he meets the prettier but moody Sunci (Pilar Crespo). Grabi has a sister (Ana Cuesta) who is dating a neighborhood bully named Kevin Manuel (Jesus Carroza); Garbi doesn't care for Kevin and tries to break up their relationship, only to incur Kevin's considerable wrath. And while Nandi's friends are busy with women and musclemen, he strikes up a friendship with a lonely kid who lives nearby, Isabel (Isabel Ampudia).

There are no featured reviews for Déjate caer at this time.