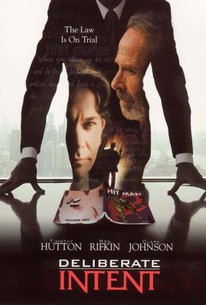 In the early '90s, someone broke into a suburban Washington, D.C., home and shot and killed a woman and a nurse at close range, and then disconnected the woman's handicapped son's breathing tube. The grim tragedy became headlines when the divorced father, music industry insider Lawrence Horn (James McDaniel), now living in Hollywood, was accused of hiring a Detroit hit man James Perry (Clark Johnson) to do the job. First Amendment/free speech scholar Rod Smolla (Timothy Hutton) is brought into the case not to help convict Horn and Perry, but to find the publisher of the book Hit Man, which was used as a blueprint for the crimes, guilty of aiding and abetting. No publisher had ever been convicted of a similar crime.

Angela Vint
as Cindy
View All

There are no critic reviews yet for Deliberate Intent. Keep checking Rotten Tomatoes for updates!

Rented this one from Netflix. Deliberate Intent starring Timothy Hutton, is one of the best courtroom dramas I've seen in quite some time. The story is very well written and really makes you wonder how far the 1st Amendment can really go. The content of the film is also quite disturbing - one man will stop at nothing for money and another man will stop at nothing for justice. The acting is very good, the story very well written and the pace keeps the viewer glued to the screen till the final fade out. 3 1/2 stars 3-23-13