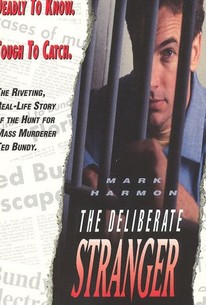 Mark Harmon stars as baby-faced serial killer Ted Bundy in this sobering 2-part TV movie. Ostensibly the archetypal All-American boy, Bundy was, from 1974 onward, responsible for the rapes and murders of several young women in the Pacific Northwest. The clues begin to mount when one of Bundy's victims manages to escape; she can only say that her assailant was a fellow named Ted who drives a yellow Volkswagen. Finally arrested after he moves from Seattle to Utah, Bundy is so certain of his superiority over the general run of human beings that he conducts his own defense at his trial; then, when extradited to Colorado, he escapes, triggering a desperate nationwide manhunt. At the time Deliberate Stranger was first telecast on May 5 and 6, 1986, Theodore Bundy was on Death Row, still contesting his sentence and seeking a legal way out. When time came for his execution, Bundy attempted several bizarre last-minute "stays," which would make intriguing subject matter should someone want to make a follow-up film.

Critic Reviews for The Deliberate Stranger

There are no critic reviews yet for The Deliberate Stranger. Keep checking Rotten Tomatoes for updates!

Audience Reviews for The Deliberate Stranger