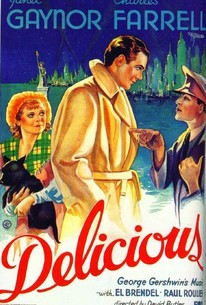 Delicious represents the first time that George and Ira Gershwin ever wrote a musical score exclusively for the screen. Unfortunately, the film fails to come up to the standards set by the music, though it's not from lack of trying. Janet Gaynor stars as Heather Gordon, a poor Scotch immigrant who dreams of relocating to the United States. Her aspirations are confounded by the intractability of the customs inspectors, who are bound and determined to send Heather back whence she came. In the meantime, she takes up residence in a rooming house catering to immigrants, where the other tenants -- especially comic-relief Swede Jansen (El Brendel) -- work overtime to cheer her up. All ends happily when American millionaire Jerry Beaumont (Charles Farrell) proposes marriage, despite his family's objections. The musical numbers include the overly coy title tune, a bizarre "Welcome to America" setpiece in which Heather dreams that she's being greeted by a singing Statue of Liberty, and a virtually complete performance of Gershwin's Second Rhapsody (aka The New York Rhapsody). The film's highlight, however, is El Brendel's rendition of the Blah Blah Blah song, in which he itemizes every love-song cliché known to man.

There are no critic reviews yet for Delicious. Keep checking Rotten Tomatoes for updates!

There are no featured audience reviews yet. Click the link below to see what others say about Delicious!