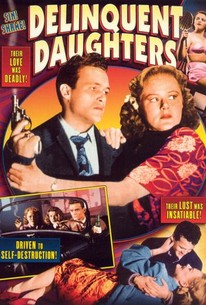 The title tells all in the PRC quickie Delinquent Daughters. June Carlson and Teala Loring play a couple of mature-looking teenagers named June and Sally, whose parents never have any time for them. As a result, June and Sally fall in with a bad crowd and get mixed up in illicit drinking, wild parties and petty crimes. Vivacious French-Canadian comedienne Fifi D'Orsay is cast against type as a hard-boiled roadhouse hostess, while Joe Devlin, who spent most of the 1940s playing Mussolini lookalikes, represents The Law. As was the case in most films of this ilk, Delinquent Daughters ends up in a courtroom, with a stern-voiced judge (Frank McGlynn) admonishing both the girls and their neglectful parents.

There are no critic reviews yet for Delinquent Daughters. Keep checking Rotten Tomatoes for updates!

There are no featured audience reviews yet. Click the link below to see what others say about Delinquent Daughters!