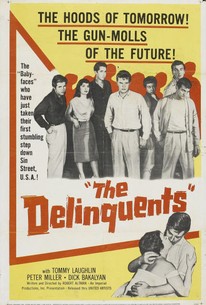 Filmed on location in Kansas City, The Delinquents was the first big-screen directorial effort by Robert Altman, who also wrote and produced the film. Altman's participation is far more impressive than the film itself, which is pretty bad. Future Billy Jack star Tom Laughlin plays Scotty, a nice teenager who goes bad in a hurry. Told to get lost by the father of his girl friend Janice (Rosemary Howard), Scott gets mixed up with a street gang, headed by the ineluctable Richard Bakalyan. The film's highlight is a rumble at a drive-in movie, which is so much better than the rest of The Delinquents that it stands out like an unsore thumb. For music fans, Julia Lee and the Bill Nolan Quintet Minus Two offer a rendition of the deathless "Dirty Rock Boogie."

Critic Reviews for The Delinquents

While The Delinquents certainly isn't an Altman classic, you can witness the seeds of a great cinematic mind that is on the verge of breaking out.

The film didn't even have good music to go with its teen story.

Audience Reviews for The Delinquents

The thing that I love about this movie is that my generation can't really tell the "hoods" from the.."goods" I guess.. you know?. They're all wearing highwater khakis but it was the attitude that made em different. Good movie. I really enjoy 50's teenage angst movies.