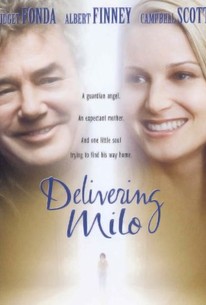 An unborn child has to be convinced that moving into the big, bad world is a good idea in this comic fantasy. Elizabeth (Bridget Fonda) and her husband Kevin (Campbell Scott) are a couple expecting a baby, who is due at any time, and when labor sets in, they rush to the hospital in anticipation of the blessed event. But after Elizabeth spends many hours in labor, nothing seems to be happening, throwing both her and her husband into a state of panic. As it turns out, their son-to-be, Milo (Anton Yelchin), is waiting in the otherworldly Life Training Center, where children about to be born are shown the ropes of how life on Earth works by a staff led by Mr. Gordon (Douglas Spain). Milo, however, has gotten cold feet, and decides he doesn't want to put up with the bother of life on Earth. Having a child refuse to make the journey into the real world could upset the balance of the universe, so fallen angel Elmore (Albert Finney) is given a final chance at redemption by the Powers That Be -- Elmore is to take Milo on a tour of Earth and convince him to say the five magic words, "I want to be born." Delivering Milo was shown at the 2001 Cannes Film Festival, and made its North American debut at the Palm Springs Film Festival the same year.

Quincy Le Near
as Mr. Lou

There are no critic reviews yet for Delivering Milo. Keep checking Rotten Tomatoes for updates!

There are no featured audience reviews yet. Click the link below to see what others say about Delivering Milo!