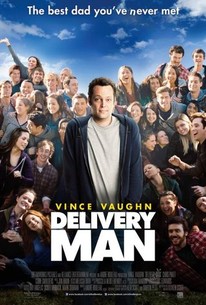 Critics Consensus: It has an undeniably sweet charm, and Vince Vaughn is eminently likable in the lead role, but The Delivery Man suffers in comparison to Starbuck, the hit Canadian comedy that inspired it.

Critics Consensus: It has an undeniably sweet charm, and Vince Vaughn is eminently likable in the lead role, but The Delivery Man suffers in comparison to Starbuck, the hit Canadian comedy that inspired it.

Critic Consensus: It has an undeniably sweet charm, and Vince Vaughn is eminently likable in the lead role, but The Delivery Man suffers in comparison to Starbuck, the hit Canadian comedy that inspired it.

From DreamWorks Pictures comes "Delivery Man", the story of affable underachiever David Wozniak, whose mundane life is turned upside down when he finds out that he fathered 533 children through sperm donations he made twenty years earlier. In debt to the mob, rejected by his pregnant girlfriend, things couldn't look worse for David when he is hit with a lawsuit from 142 of the 533 twenty-somethings who want to know the identity of the donor. As David struggles to decide whether or not he should reveal his true identity, he embarks on a journey that leads him to discover not only his true self but the father he could become as well. (c) Disney

A sentimental exploration of what fatherhood means that doesn't overdo it with the sperm gags, it's a rather charming if unexceptional dramedy.

The tone wavers between the pantomime and the mawkish and while little has been lost in translation, less still has been gained.

Alas, the hero is played by Vince Vaughn, a limited actor whose range extends from petulant to homicidal.

If you want something truly gruelling, try the new Vince Vaughn comedy.

Vaughn hands in a charming performance with all the rough edges buffed away in a movie that is unabashedly sweet - some might say corny - but there is no cynicism here and that is the movie's main strength.

The real pity here is that Vince Vaughn actually does stretch himself a bit and is mostly successful at doing so.

It is a clever-ish premise that is not placed under pressure to generate too many dumb chuckles for the sake of it.

[Delivery Man] falls short of being more than schmaltzy. The plot is incredulous and predictable in places.

Delivery Man, all glossy and gussied up, arrives without a pulse, extolling the same exhaustingly unrealistic fantasy that parenthood is life's cure-all, even for hopeless losers.

Delivery Man's failure lies in the gulf between the two films it's trying to be. Certain moments feel like leftovers from a more serious-minded picture... The rest of the film is pleasantly inconsequential, but these lapses in tone sour the picture.

"Delivery Man" tells the story of a man who used to be a sperm donor, ply to find in the future that he has birthed over 533 children over the years. Of those 533, 142 of them wish to know the identity of their biological father. With many heartfelt moments and some solid comedy, this is a film that I will have no problem rewatching in the future, but with someone else. It is a very well-made film for what it is, but it does lack a little in it's script, which felt all little off. Vince Vaughn actually seems to be into this role more than his others, as he does not have as many witty remarks. I definitely recommend the film to suckers of the dramedy genre. I really enjoyed it!

Vince Vaughn for a while was my favorite comedy actor. "Old School", "Swingers", and "Wedding Crashers" are all three amazing comedies. But Vaughn has transitioned away from those cutting edge R rated comedies to more family orientated PG-13 movies. Which is fine, if the movies are funny. His act doesn't really translate to tamer comedy as good as say Eddie Murphy. "Internship" was ok, and now here's "Delivery Man" which on paper sounds ok. A guy(Vaughn) finds out there was a mixup with a sperm bank he used to donate to and he fathered 533 children, whom all want to know who their father is. The problem is this is very lighthearted and Vaughn doesn't play to his strengths. The funniest moments in the movie are involving his friend/lawyer played by Chris Pratt. Pratt is awesome and on a real roll lately with movies. Vaughn on the other hand seems to be on the down slope. Hopefully his next movie is R rated and he can go back to doing what he does back. Lot's of fast talking, cussing, and being an egomaniac with charm. Otherwise he'll end up like Eddie Murphy in another version of "Pluto Nash". This movie isn't horrible, it has it's moments. But thinking of how good it COULD have been is a little depressing. Give it a shot, but keep expectations low and afterwards watch some "Old School" for some real Vaughn comedy.