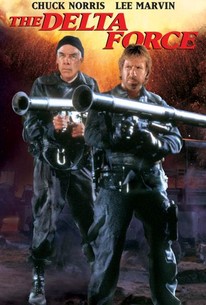 The first installment in a series of pictures, The Delta Force was loosely based on the true events of a June 1985 hijacking. The leader of an anti-terrorist force (Lee Marvin) and its most effective member (Chuck Norris) must deal with a group of fanatical Arabs who have taken over a jet bound for Rome and have ordered it to fly to Beirut.

William A. Wallace
as Pete Peterson

Critic Reviews for The Delta Force

The unoffended will find that the movie doesn't even deliver on its own sordid level.

The Delta Force settles down into a well-made action film that tantalizes us with its parallels to real life.

The Delta Force suffers from a midsection that grows less and less interesting (and more and more interminable) as time progresses...

Works equally well as a tense, powerful hostage drama and a rousing action film. The Delta Force gets my vote as Chuck Norris' best movie.

One has to question the excessive carnage of the finale and its celebration of the eye-for-an-eye ethic.

Audience Reviews for The Delta Force

Dumb actioner but as dumb actioners go this one at least moves quickly.

There's a major hostage crisis going down, a small team of Arabian terrorists have taken control of a US airliner packed with innocent civilians. They wanna hurt the US of A, they will stop at nothing...what are you gonna do??. There's only one thing you can do, only one man you can call, Bruce...no not him, Sly...no try again, Arn...no! god damn it! Chuck! Chuck Norris! remember him? the bloke who never swears, the one with the stubble thing going on. 'sleep tight, sucker' Now you'd think this was a stupid one man army type flick with hordes of bad guys getting mown down by the all American hero...and you'd be right. No seriously its actually a lot deeper than that believe it or not. There are many aspects of this film which have been based around real events which does give the film a serious biopic vibe, even though it is just an action flick. The start of the film is set at the end of US Operation Eagle Claw as the Americans are evacuating Iran. But the main crux of the films plot is clearly based on the hostage crisis in 1985 of TWA flight 847. In fact the plot here is virtually an exact recreation of what happened, so it could almost be seen as a proper historical account, almost. As for the actual rescue by Norris and his team, that is of course all make believe and where the film does enter the action man genre. To be honest everything up to that area is pretty intense really, the hijacking by a young tanned and impressive Robert Forster is really good and pretty authentic looking (can Forster really speak Lebanese?). You do actually feel uncomfortable watching the terrorists at work, you feel for the passengers and it does make you think about what you'd do in a similar situation. The scene where the bad guys start to single out all the Jews is admittedly an emotional moment, things get nasty and all you can think is where the hell is Chuck Norris. Once you get past the airliner sections the film does loose that intensity, all the male/Jewish passengers have been locked away in a Beirut dungeon and its up to Delta Force to kick ass. This is where we get into Rambo territory as I'm sure you can guess. Its been slow coming but eventually you do get what you paid for if you paid for it that is, America's finest going head to head with errr...Robert Forster and his henchmen. Sounds good right? well...meh. Yeah its OK but its not as awesome as I kinda expected, there are quite a lot of Delta Force soldiers so you don't really feel like you're watching an elite ops team, more like a platoon. The danger aspect is kinda lessened because there are so many of them. They are all driving through the town en route to the evil terrorists lair, no one sees or hears them apparently, despite them being a small armada. Then once the action does kick off we don't really see much of them, it all focuses on Norris running amok and taking everyone out just by growling at them (but not swearing! no swearing ever!!). Can't deny its fun to watch the hairy one do his thing with that mullet whipping in the Middle Eastern wind but it does get hokey. The whole thing with him on the motorbike felt way too much like a kids superhero flick, plus do Delta Force use motorbikes with rocket launchers fixed on them?. The stunts are as you would expect from an 80's action flick...obvious. Obvious in the sense that you can seen the ramps vehicles go over, they explode for no reason, chases are clearly going at a snails pace and frequently hit stalls loaded with fruit and veg. Then there's my favourite, when about three or four bad guys appear and the good guy merely waves his gun randomly in the air at them and they all go down flailing like mad, classic stuff. I love the films dated stereotypical approach to the Arabian bad guys though. All sweaty dirty looking with thick facial hair, wearing camouflaged army fatigues and head bands. Especially at the start of the film in the airport where one of the terrorists is trying to board, boy he doesn't look too suspicious with his mop of hair, scruffy beard and dripping in sweat!. Oh and the soundtrack is classic too, plays all the time, usually completely out of place and its entirely the wrong tone for film. Its a bit of a Norris classic no doubt but the films vibe changes dramatically throughout. At first its quite a serious and strong drama based on reality, then things slowly change and we get the obligatory action man stuff but with silly 'A-Team-esque' vehicle jiggery pokery. Overall it did feel a bit like a TV movie at times to me, the lack of blood and hard violence lets it down if you ask me. Not that violence, blood and swearing makes a film better but there are times in films like this when you just need it to get you going, up the anti. Not the best special ops action flick I've seen mainly because you only get special ops action at the end and even then you only get to know about three of this large squad, and one of them is Norris. I guess it doesn't feel like a special ops film to me, just a rescue film.

This was my least favorite Norris movie so far. It's more of a disaster and war movie, and I don't really care for either, let alone a combination of the two. This is too boring and too long.

What an explosive '80 action-thriller film to see the crack team of commandos including super-soldiers Chuck Norris and Lee Marvin can rescue the innocent people hostage taken from political extremists in this astounding mix of fact, fantasy and heavy-duty adventure. This is 130 non-stop minutes of explosive, wall-to-wall action! Of course, you get plenty of ass-kicking fight scenes thanks to Norris who has never seemed tougher in a film. Marvin is also perfect in his role. The action gets even better when Norris rides out on his motorcycle shooting missiles out the front and back! The cast is very good as well including Martin Balsam, Joey Bishop, Robert Forster, Lainie Kazan, George Kennedy, Hanna Schygulla, Susan Strasberg, Bo Svenson, Robert Vaughn and Shelley Winters. Marvin and Norris also have great chemistry together on the screen and among the most convincing tough guys in Hollywood.